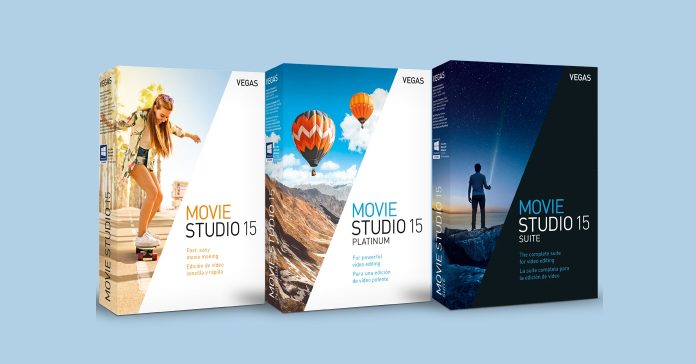 So hot on the heels of last week’s announcement from Corel on the update of VideoStudio X10 to VideoStudio 2018 we have one from Magix as well.

They have just released their latest version of Vegas Movie Studio 15 which is the second update since Magix acquired the Sony Creative range of video editing software a few years back.

This release is probably not what I would call a major rework of the program but fits more into line with what Magix have been doing with the program since they bought it.

To some degree under the Sony banner both Vegas Movie Studio and Vegas Pro were beginning to lag a little behind in their development paths especially from the perspective of the users.

Changing formats, workflows and styles of projects being created inevitably shift over time and any software needs to adapt quickly to those changes.

Magix have done a great job in hauling Movie Studio and Vegas Pro up into the present and this one looks to be no exception. Hopefully I’ll have a new review of Vegas Movie Studio up some time next week.

One of the most important points that you have to pay attention to if you want to gain any traction on YouTube is that of consistency.

YouTube is well aware of the phenomenon of people starting out YouTube Channels with the very best of intentions then a week, maybe two weeks later abandoning the process because tit all got a little too hard.

When you start a YouTube Channel they will take note of it and they will then begin a process of watching that channel to see what happens.

If you can continue to create content and do it consistently you will slowly begin to build authority in their eyes and be rewarded with views and the appearance of your content in search results.

It is very much a long game and don’t let anyone tell you any different.

If you falter, you will be sent back to square one and the watching process begins again.

So how do successful YouTubers do it?

They have a process.

I don’t just mean a “get a video up every Friday” kind of process.

I mean a pre-planned, step by step, start to finish process.

Tim Schmoyer is successful, below is his process.

Check it out and keep in mind that if you are not prepared to go to at least the same lengths then YouTube may not be for you.

Good video this week from Zach Ramelan offering some tips on making the editing process easier.

From my perspective I think steps one and two are perhaps a bit out of whack but otherwise it’s all good advice.

He suggests beginning the editing process by inspecting all the available footage and adding it to the timeline then assigning it as being useful or not.

Then he goes on to the next point of organizing the footage into bins (folders) etc.

I tend to think of these two steps as one and generally don’t add it all to the timeline in my editing software.

I just go though all the footage with reference to my overall storyboard or project outline and organize the assets at that point.

From there I roughly construct the project with those assets and continue from there.

I don’t think either way is right or wrong, just different strokes for different folks.

Successfully uploading videos to YouTube used to be quite a technical process back in the day.

The main concern was that whenever you did upload a video, YouTube would automatically re-process that video and before you knew it, your video looked like crap!

Thankfully these days it is all a bit easier and most modern video editing software programs have the ability to directly upload as well as do it in the best formats to retain quality.

However just uploading a video is no longer a guarantee that at least someone is going to see it.

The only way you can improve you chances is by (sadly) doing the paperwork!

You can’t get away with just a title and a brief description anymore!

So with that in mind check out the video below for a complete run through of all those added settings you need to take care of when uploading to YouTube.

The link below goes to an excellent article that explains some of the ins and outs of working with different formats on the timeline in you projects.

In fact this is a question that comes up on this site quite often so it is well worth taking a look at.

Interestingly most fully professional video editing software is designed to deal with mixed assets on the timeline and up to a point even most consumer level video editors can do it.

However just because they can do it doesn’t mean you should!

Mixed assets put even more stress on your computer on top of the existing stress caused by high definition footage and in many cases you are just asking for trouble.

Easily the best way to deal with the situation is to add a pre-editing step that involves working out what footage you have and what the parameters of that footage are, how you want to distribute your final output and then working out a “happy medium” format for the whole shebang.

Then it is a matter of converting all files that are not at the “happy medium” parameters into that and THEN begin editing.

A resource or at least group of resources that I am always looking far are free stock image websites.

I use images both in my video projects as well as on this website and given that I am a total tightwad, I tend to use freebies all the time!

The problem with a lot of the free image websites out there is that many do not really start off with much of a business plan in place and so very often disappear quite soon after the owner has realized the costs involved.

Bandwidth alone for a pure image based website where you are actually inviting people to endlessly download can go through the roof pretty fast.

So this week I came across a list of free stock image website on Berkley.edu which although hardly comprehensive, does link to a few reliable services with a good range of images on offer.

This is a great resource for anyone wanting to make an explainer video or some kind of instructional video.

The basic problem when you are making these types of video is that you already know all about the process or skill being taught.

Because of that your own knowledge may tend to have you overlook or completely miss steps or information because… well… you already know!

This can cause confusion in the viewer or even result in a complete misunderstanding or what you are trying to communicate because unlike you, the viewer does NOT already know!

The link below goes to a full page of steps and points to keep in mind as you put any such video together to make sure you include everything you need to.

The Basics of Masks for Video Editing

If you have ever wondered about anything regarding the use of green screen all you have to do is search “green screen” on this site and you will come across a video by the Basic Filmmaker.

It has everything you could possibly need on that subject from soup to nuts.

Why am I mentioning this under the heading of “The Basics of Masks?” Well I’m glad you asked!

The Basic Filmmaker has done another tutorial which although not similar in subject matter is similar in its completeness and yes, it is on the subject of creating and using masks.

He goes over six separate examples of creating masks and some inventive ways of using them in projects.

The entire video uses Premiere Pro as the editing platform but as Kevin mentions in the video this is totally unimportant.

The names of features and the terminology of masking is pretty much the same regardless of which editing software you are using so don’t get distracted by that.

Watch this video, use the techniques in your own editor until you can do it easily and you will be well up to speed on masks.

A welcome return this week by Maliek over at PowerDirector University.

This week a great tutorial on using the NewBlue FX Garbage Matte filter that comes with PowerDirector.

Even if you don’t run PowerDirector or use that particular NewBlue effect it give a great run through and overview on using any mask or matte effect in any software.

On the surface of it this video would tend to make a lot of people just walk on by with the certainty that it had nothing to do with them because they don’t do videos for YouTube.

If you think that you would be totally wrong.

Yes it is aimed at the process of making YouTube videos but is very certainly does not end there.

The entire subject applies to any creation of video and goes a long way to showing just how important planning ahead is when you are trying to shoot and edit videos.

One of the most obvious things I see on YouTube and other video sites is when someone has created a video and from the beginning it is patently obvious that the whole thing was kind of made up as they went along.

Great tutorial I came across this week on how to create a kind of filmic look in your videos using some of the most basic tool in color correction that probably most video editors have.

Take note that the creator of the video very clearly states at the beginning that creating a film look does NOT just happen because you do some color adjustments after you have shot your video.

The real look of a cinema production involves many, many other aspects especially at the shooting stage but having said that there is a bit of a “down and dirty” trick you can use to get closer!

The tutorial is done using DaVinci Resolve but that part of it is irrelevant.

It is the technique that is important.

Just look for the section regarding the “S curve” adjustment which will get you on your way.