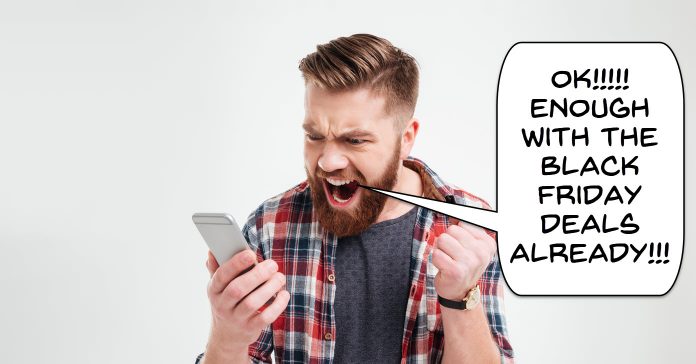 It’s a bit of thin Friday Roundup this week mainly due to the American Thanksgiving celebrations.

Of course being an American holiday there has to be some unashamed commercialism involved in the form of Black Friday sales!

Most of my usual sources of information, tips and tricks have all gone into “selling” mode so actual “news” is a bit scarce.

Obviously if I had any marketing skill whatsoever I too would be bombarding you with “crazy deals” and stuff like that!

In fact quite a while ago when I first started this site I used do all of that until one day I had a realization about it all and I think there is something for all of to learn here.

I would spend hours and hours in the weeks leading up to Black Friday researching all the software companies and what deals they were offering.

They would all have lots of variations on their deals and all sorts of coupon codes and to be honest, making sense of it all was a nightmare.

Then one year I finally cracked the code and realized something very interesting.

It didn’t really matter what deal you took up, what they called it or whatever.

At the final point of sale on the software makers website it was all the same!

The reality is that Black Friday is a great time to upgrade your software if you want to, to jump ship to another brand or add in some new plugins or exras that you may want.

Don’t bother with wandering the expanses of the internet to get the best deal. The software companies have already set that!

Just go to the relevant website and the deal you want will be sitting there ready to go.

I thought this was a very cool video when I came across it the other day.

It is a demonstration of using a what is essentially a TV screen as a lighting source.

Given the fact that most of us are using digital LED TVs these days the concept of using them as indoor lighting sources is a very good one.

In the demonstration all the guy is doing is loading various images on to the screen and showing the different ways those images can be used to light a subject.

With most TVs these days you can just load a white image or some variation of that and have the TV “play” that image and voila, instant indoor light source!

OK so it is with great reluctance that I once again include an article on 360° video.

I am still on the fence about it from a home user point of view but despite that I am also guessing we are all going to have to confront it at some point!

So in an effort to ease you and I into the subject here is an article on shooting 360° video.

I read some of it… honest!

The marketers of video editing software like very much to write gushing blurb about this or that function in their editing product which is an absolute “must have!”

Usually they never really go into why it is such a “must have” or even at times what it actually does!

One such feature I have noticed is the HDR effect in many of the current batch of programs.

HDR stands for High Dynamic Range and of course now that I have told you that you are probably none the wiser!

So check out the video below which not only shows how to use the effect in PowerDirector but gives some good examples of why you may want to use it… or not!

If you are at all interested in becoming even the slightest bit proficient in color correction or even color grading then this is the article for you!

Over the years I have come to the conclusion that color correction is some kind of dark art and that only a deal with the devil will ever result in me getting any good at it.

Sadly the devil has made no offers so far and as such I remain hopeless.

The problem for me and probably a lot of other people is that when I look at an image that needs correction I can generally see that it does.

However when I try to begin the correction process I very quickly lose perspective on what I have changed, how it differs from the original and whether or not it now looks better.

Within five minutes all colors look the same to me and I am totally lost.

The end result is usually that I just undo all the changes and go have a coffee.

Of course the real problem here is not technical, it is that I look at color just like everyone else but what I don’t do is look at color from a correction or grading point of view.

There is a way to train your self to see color that way and fortunately the link below goes right to an article on the subject.

Pretty simple video below covering the pan and zoom function in Pinnacle Studio although it is almost identical in whatever editing software you are using.

Get That Old Film Look

This is a pretty simple tutorial from Filmora this week on applying and “old film” look to your projects.

The filter in Filmora that handles this is a straightforward out of the box one so as such is a bit of a no-brainer.

However because it is a prepackaged effect in an intentionally simple editor it’s pretty much what you see is what you get.

If you are looking for something a little more advanced you would need to be using an editing program that offers a little more control over the parameters of the effect itself.