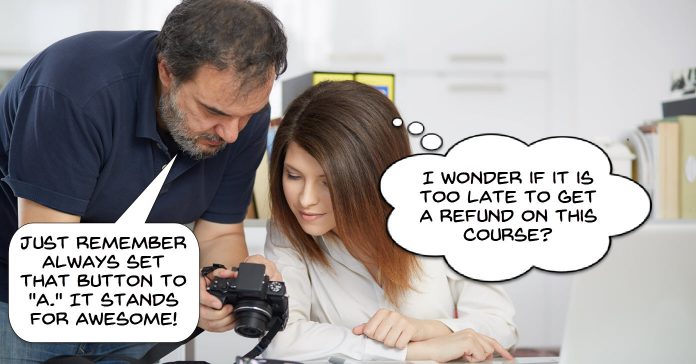 This is another good no-nonsense tutorial I came across this week on the subject of manual settings especially in DSLRs and camcorders.

Many new and inexperienced video shooters tend to go straight into the Auto settings of their cams and stay there almost forever.

Even if the average person does try to dip their toes into the wacky world of manual settings the experience tends to leave them a little shell shocked and they quickly retreat!

To be fair there is good reason for that and it comes down to the way the subject is presented to the newcomer.

Too often I see tutorials or information that assumes other knowledge or goes way too technical and complicated way too fast.

So check out the video below to get a simple explanation of one of those settings the ISO or on Camcorders, the Gain.

If you are not familiar with the concept, “Stories” are generally short, live, unedited or relatively unedited video broadcasts uploaded to a platform, distributed immediately and then remain for approximately 24 hours.

After that they are deleted automatically never to be seen again.

Successful influencers on these platforms use them to engage with their audience spontaneously in addition to their regular and more formal content.

So getting back to YouTube, they have been developing a similar feature for a while now and recently made it available to a broader cross section of the YouTube community.

If you are on YouTube or are thinking about it then this new feature is probably something you are going to have to get a grip on some time soon!

So in light of that check the video below for a complete rundown on what it is, how it works and how it can work for you.

Two editing features I particularly like in PowerDirector 17 by CyberLink are the Profile Analyzer and the SVRT tab.

Not exactly the sexiest sounding modules but a couple of features that allow you to make good decisions on how you are going to render your final video file.

So first up let’s clarify a few terms here.

Rendering is when the software completely decodes and rewrites a video or audio file to a different format or set of parameters.

Any time a digital file is “rendered” there will always be a degree of degradation in the quality of the resulting file.

Most often that degradation is barely noticeable but it does occur and has to be monitored.

When you have a set of files on the timeline that have differing parameters the rendering process will require that one final set of parameters has to be decided upon.

This usually means that some files get re-written and others are just copied as is.

The most desirable set of parameters would be the ones that require the least amount of re-writing in order to maintain the best quality.

There is also one further factor that needs to be considered and that is which set of parameters or file type is best for how you are going to distribute the final project.

So getting back to PowerDirector, the Profile analyzer is a great tool that allows you to analyze a project on the time line and lets you actually see how much of the overall project will need to be re-rendered and how much can just be copied from the original files.

SVRT (Smart Video Rendering Technology) performs a similar function and again lets know what you have and based on what you want to do with the final file, what would be the best strategy for efficient rendering.

Get Cinematic by Connecting Your Shots

This is a pretty good run through and explanation on how to “think” about shooting video and is a great example of how the pro’s “shoot to edit.”

How to Edit Music to Your Film

OK for the video below block out the editor being used and even ignore the self promotion for the sale of soundtracks and for the sake of completeness… everything else!

Just pay attention to the section on how the presenter is going through the decision making process of adding and removing music or pieces of music to build the sound track.

I am not expecting anyone to be dealing with music editing at this level.

But I do think it is a great exercise to watch a pro working on something especially when he or she is explaining the reasons for various things as they go along.

How to Make a Hyperlapse

Time lapse and hyper lapse sequences are one of those things that when described, seem pretty simple.

However achieving a smooth and professional final product usually turns out to be not so simple!

As per usual in the world of of shooting and editing video, the devil is in the details.

Just to clarify here, the difference between a time lapse and a hyper lapse is that in a time lapse the sequence of images being taken for the project are all shot from a single point.

A hyper lapse is when you take a sequence of images for the project but throughout are moving the camera.

I have posted a few times before on this subject but I wanted to include the video below this week from John Luna.

I like his style of presentation and he packs his videos with excellent little tips and explanations of why things should be done a certain way.

Whilst the editing part of the video is shown in Premiere Pro the general concepts of how you put it all together remain the same regardless of which editing software you are using. Even video editing software as simple as Filmora can do the steps necessary to create a hyper lapse.

PowerDirector – Make an image flip as if on a playing card

Whilst making a card flip on the screen to reveal the image of someone on the other side may not exactly light your fire as far as creativity goes that’s not why I have added the videos below!

Modern video editing programs even at the consumer end of the market these days come equipped with some pretty powerful features.

One thing they share with the pro end of town is the fact that those features alone are not going to somehow automatically give you professional looking results… despite what the guys in the marketing department say!

When a pro looks at the features of a program he or she does not assume that feature is going to singlehandedly deliver the result.

What they do know is that the feature is a tool and is designed to do the bulk of the work semi-automatically but from that point forward it is up to the editor to finish it off.

That’s why I have included all three of the videos below.

Simply flipping a playing card onscreen to reveal the face of someone as the other side of the card is stupid simple.

You just have an image of a card on the timeline followed by the image of the person.

You make sure you have cropped both to exactly the same size, slap a rotation transition in between and voila! Move magic.

In the first video it takes about a minute to demonstrate that!

The value here is in how the user manipulates the process even further to get a better result.