You are here: Home / DIY Video Editor Blog / The Friday Roundup – Just Because You Can, Doesn’t Mean You Should! 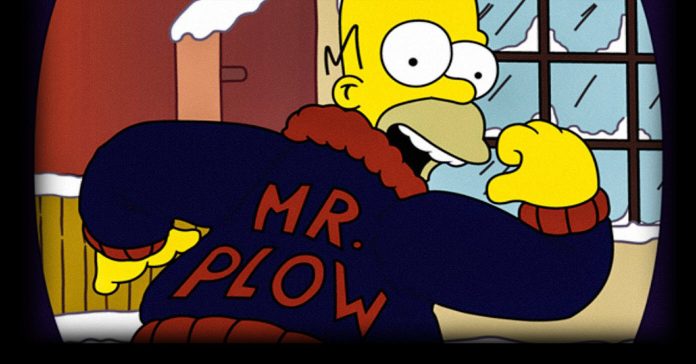 This is by far my favorite video for this week.

Currently most video editors have at their disposal a vast array of tools and features within their particular brand of video editing software.

A few years back when I would be gathering articles to post on the Friday Roundup there would always be a heap that I would ignore because they depended on features only available in pro editing software.

These days that is happening less and less.

Fully featured editing software at the consumer level can’t do everything that the pro software can but they can certainly do way more than was imagined a few years back.

The downside to all of this comes back to that old rule in editing which is, “Just because you can, doesn’t necessarily mean you should!”

I am very much reminded of an episode of the American animated series, “The Simpsons.”

In one episode Homer starts off his own snow plowing business and becomes hugely successful.

Then his friend goes into competition with him so Homer engages an advertising company to make him a TV commercial.

The ad plays while the family watches and it is so conceptual and pseudo-arty that at the end Lisa says, “Dad. Was that your commercial?” And homer replies mournfully, “I don’t know.”

You can see it underneath the video below.

Whilst it is great to learn new techniques and effects the bottom line must always be, is it appropriate to the project I am working on and does it enhance the experience and not distract from it.

This is a great video on the subject of practice and more specifically, what to practice.

You will very often see people offering advice on video shooting and editing that constantly repeats the idea that you have to practice.

But this in itself is not all that valuable as advice because they rarely include what it is that you are supposed to be practicing.

In the video below there are some great guides to specific skills that you as a video maker should be practicing.

From my own perspective I would add that you can work out for yourself what you need to practice by just isolating the various steps of the process and evaluating which ones are your weakest points.

Take those weak points and concentrate on them.

Many years ago there was a study done of violinists across a number or world renowned symphony orchestras.

They were trying to find out what was the difference between those who were orchestral violinists and those that had risen to either lead violin or had become soloists.

They found that the key difference was not the amount of practice but what was being practiced.

The top musicians overall practiced for less time but spent 80% of their time working on skills they felt were weak and 20% on honing existing skills.

For the rest the opposite was true.

This is the third of the three main articles I wanted to draw your attention to this week.

Ever since I became involved in shooting my own videos and editing them back in the day of standard definition there has been an ongoing arms race in the world of resolutions.

This video covers where we started and where we are now with a good explanation of each development along the line.

However the key to the video is right at the end so please check that out because it is an important message to anyone making videos.

I see evidence of that endless search for the reason why my videos aren’t so good everywhere.

And sadly the almost automatic answer provided is that you need this or that latest thingy.

How To Make The Classic Batman Transition – PowerDirector 17

OK if any of you out there remember or have seen the original Batman T.V. series you will of course remember this!

It is the spinning scene transition using the original Batman logo of the series.

Now I am not one for using glaringly obvious transitions between scenes but on the other hand if you use one that is totally over the top it can be pretty awesome.

Then again once you get this one down you can add your own logos or images to suit your projects.

The full walk though is below and although it is in PowerDirector even the simplest editing software should be fine with making this one.

This transition effect tutorial applies to Premiere Pro or Adobe but at the end of the day the technique is actually quite simple.

Think of a kind of glitchy blurry thing at the point of a transition and you will pretty much have it!

The tutorial video goes into great length and complexity to achieve the actual effect but I am not really convinced it has to be all that complicated.

I think if you just add a glitch of blur at the point of a cut or an existing transition you should end up with the same thing.

Instagram’s video features have been evolving over time and let’s face it, they will probably continue to do so into the future.

Like most social media platforms their development is mainly driven by the data the gather about how users are interacting with the platform.

Last year saw quite a few changes so if you are in to posting video on Instagram here are the latest best practices on doing that.