OK this one is my “pet peeve/time to get on my soapbox rant” article for the week.

This stuff really annoys me.

You see the idea that you are going to achieve this incredible degree of zoom on a consumer camera and that somehow it is awesome is nothing more than a marketing lie.

It is the old idea of throwing big meaningless numbers at people knowing full well they don’t really understand them so that they are amazed and will buy.

What they are saying is that the camera has an 83x Optical Zoom lens on it so you can zoom in on things miles away and video them.

The truth is that yes, you can do that but at full zoom you MUST use a tripod (and a sturdy one at that) and that the quality of the picture you get may not be quite what you were hoping!

Yes, it is impressive that Nikon have somehow managed to get a lens like this on to what is a $500 camera! But that’s not the whole story.

They go on to extol the virtues of their 16 megapixel sensor in exactly the same way.

I mean, that’s a whole bunch of pixels and the more pixels the better right?

The real story here is that yes, there are 16 megapixels on the sensor but unfortunately the sensor is only 1/2.3″.

Take a look at the graphic below. 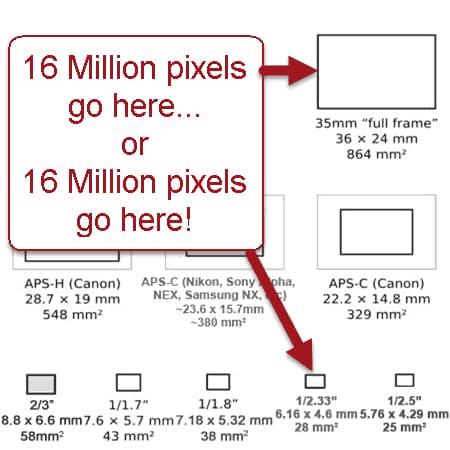 The sensor at the top is full size, the tiny one at the bottom is the Nikon size.

Imagine both have 16 megapixels (16 million pixels) and that the quality of the image is determined very much by the actual size of each pixel (not just how many) and you will see what I am talking about.

But here is the original video.

Tim Schmoyer put together a little hangout and recorded it involving some of the best YouTube creators on the scene today.

Now of course there are a great many successful YouTube personalities around these days but the ones in this hangout are of particular note for one very good reason.

One of things I learned very early in the process of putting together this site and in my own journey of discovery in the field of video is that there are people who may be very good at what they do yet are quite hopeless at explaining it to others.

In fact one of my oldest and dearest friends since childhood is a rather well known and internationally respected cinematographer.

You would think that by having his ear I would be able to learn everything I need to know about video in pretty short order or at least be able to access the information I need from him whenever I want! Wrong!

I can look at his shooting, his demo reel and be awed yet ask him the simplest of questions and all I ever get is gibberish!

He is absolutely hopeless at imparting information as to what he is doing or how he is doing it.

So the video below is quite exceptional because it consists of people who are not only leaders in their field but are also very good at explaining and teaching others in a way that you can understand.

I came across this video this week from Gripps where he was answering a question from a reader regarding setting up a project so that it was suitable for an unusual screen size.

Of course on the surface most of the consumer level video editing software suites are set up to accept, work with and ultimately output to what are the most common settings around at the moment.

The reason they do this is to keep things simple and generally to speed up the workflow by not boring you with a bunch of questions regarding your choices for each project.

The interface is designed to try to keep things as simple as possible.

This doesn’t mean that your average editor cannot be used to do things a little more “out of the box!”

If you take a look at the video below you will see Gripps goes into some of the deeper settings to access control over outputs and projects settings.

Of course this video relates to Corel VideoStudio but that fact of the matter is that just about every decent video editing program will provide access to these settings in some way.

Take a look at where he gets into the settings and you will probably find that your editor is pretty similar.

This week from Techsmith another of their very well presented tutorials on how to do stuff!

One of the more difficult types of instructional videos to make is one where the action is taking place on a mobile device.

Of course if you are on a full computer then software like Camtasia can be used to just do it and record it at the same time.

Unfortunately on a mobile device there is nowhere near the kind of processing grunt and space for software that could do that so the only real alternative is to actually video the device itself.

This process introduces a whole range of problems to the shoot in terms of shot setups.

How to avoid reflections so you can see what’s going on, how to not block the view of the camera when you are demonstrating and a bunch of other stuff.

As usual Techsmith put it all together in an easily understood way to make you mobile demo video a success.

With the release of Corel VideoStudio Pro X8 there were a couple of features added that many people would most likely have overlooked.

The reason for this is probably that the features themselves appeared rather innocuous and in addition to that they are buried deep in the interface.

The convert to .png function is pretty self explanatory in that wherever you have the cursor on a clip in the timeline you can just right click and create a still image of that frame.

This is especially useful for freeze framing because you can then extend the amount of time the clip appears for.

The other upside to this feature is that when you do choose it, the program inserts that image file at the exact point where you chose to take the snapshot of the video.

Of course just about all editors can do this but the value in the Corel product is that final automatic insertion step which means you get a frame accurate insertion rather than having to fiddle about trying to insert your image at the right point.

The second feature, Create Animation” is a little more interesting than it appears in that you can similarly take a point on the timeline and convert it to a mask then manipulate it from there.

Instead of going into endless detail here and totally confusing you, take a look at the video below from Gripps as he steps through the task.