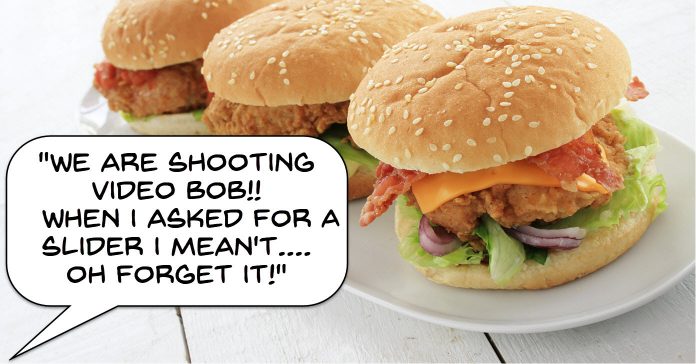 One of the most common accessories you will have thrust at you from online advertising are sliders and no, I don’t mean those little hamburgers you get at outrageously expensive restaurants!

I mean the little tracks you can use to attach a camera and add movement to shots.

One of the reasons sliders are used is that you can add just a little amount of movement yo the camera as you are shooting which in turn can add a whole lot of interest to what would be a boring, static shot.

The main difference between using a slider and trying to add movement handheld is in the movement itself.

It doesn’t really matter how steady you think you are shooting handheld and regardless of software stabilization features, a handheld shot is always going to look like a handheld shot!

The importance of this is in the audience perception and what is communicated to them on a subconscious level.

Camera movement achieved by a slider will be invisible to the viewer whereas a handheld shot announces itself as such no matter how hard you try.

In the video below you can see this in action as well as getting a few tips for how to use a slider and why.

Try to get past the annoying guy presenting the video although you can even learn something from his presentation technique.

Up until version 16 of CyberLink PowerDirector the only way you could use LUTs was from within the ColorDirector module that came with the higher end versions of the program.

This year CyberLink introduced the ability to use LUTs in the color correction tools of the PowerDirector program itself making them available to everyone.

Now if you know what a LUT is then you are probably thinking:

b) Yeah that’s OK but I don’t really use LUTs.

If you have no idea what a LUT is then you are probably thinking… what is a LUT?

Simply put a LUT (LookUp Table) is a preset set of color adjustment values that can be added to footage to change the look of that footage in one go.

There are different types of LUTs you can use for different reasons.

Some can be applied to create an overall color grade or color effect to footage whilst others are designed to compensate for known characteristics of footage from specific cameras.

What they are not are some kind of magic bullet to automatically convert your awful footage into Hollywood blockbuster material!

They can however be used with a little care to create an overall consistency to your footage.

Anyway the video below goes into using LUTs in PowerDirector 16 and covers some of the things you need to know about using them effectively.

Ten Ways To Use Only One Light

I found the video below this week and thought it could prove useful.

As amateurs we are rarely in a position to have any kind of control over the lighting condition in which we find ourselves.

Usually about as advanced as it gets is to be able to sum up the situation, identify light sources and then move ourselves into the best shooting position… although with kids even that is a bit of a stretch!

One recent little invention that could prove quite useful are those small phone sized LED lights that you can very easily carry around with you.

In the video below they cover ten ways to use those little lights to add some interest or even some control over the lighting process.

Back in the bad ol’ days when it came to playback speed in video editing things were a little more simple.

You either had no choice to speed up of slow down the video playback or if you had seriously fancy-schmancy software you could make it go faster or slower.

Bear in mind that when I say “faster” or “slower” I mean one preset speed up or down and that was about it. These days the ability to speed up or slow down your footage is a given and most software offers complete control over just how much you can do either.

However really good software offers even greater control by incorporating the use of key-frames so that parts of the footage can be adjusted as to speed as well as being able to incrementally add more and more speed or less and less.

This fine control over speed has given us a new term which is time remapping.

The reason for this term is that by manipulating playback speed very finely what you are doing in the eyes of the viewer is actually playing with time.

Now as is usually the case in editing it is not all beer and skittles when it comes to dramatically adjusting the playback speed of sections of your video projects.

This is especially true when it comes to slow motion.

Although the marketing blurb joyfully announces that you can slow you footage way down for maximum effect, what it fails to inform you of is that there is only so far you can go with it.

In fact there is a direct relationship between how much you can slow down a clip based on the project settings you have and most importantly, the frame rate at which you shot the video in the first place.

That is the whole reason why action cams like the GoPro can shoot at up to 120 frames per second.

Shooting at that frame rate it allows the user to then slow down the footage a great deal and still not lose quality.

If you tried the same thing with video shot at normal frame rates you would lose quality very quickly when you start to slow things down.

So for a complete explanation check the video below and as usual just because the demonstration is in pinnacle Studio doesn’t mean it does not apply to any other software out there.

How to Make a Sam Kolder Zoom Transition

Admittedly I have been on a bit of a roll recently venting my distaste for using prepackaged transitions that come with every video editing software program.

Fortunately there have been a few tutorials appearing of late showing just how to transition like a pro and to see them just scan back through some of the recent posts in the blog section of this site.

So this week for a change I will spare everyone the rant and just cut to the meat and potatoes.

The video below shows you how to create a very simple transition that is very, very effective if used properly.

Just bear in mind that the fact that you now know HOW to create a particular transition doesn’t mean you should do it!

Always look at how you are transitioning from one shot to another and ask yourself whether or not that transition is adding to the video project or will be distracting the audience from it.

And one final note, the video below is included because it covers the concepts you need to understand to create this transition, not because it is a video tutorial masterpiece!

5 Beginner Camera MISTAKES and How To FIX Them

Undoubtedly there are many, many people out there using their smart phones or iPhones as their main video shooting device.

In all honesty why wouldn’t you?

After all the video quality and convenience make them almost the ideal device for hit and run video shooting.

On the other hand there are also lots of people making the transition from these devices up to more advanced cameras like DSLRs and MILCs.

The reasons for this generally are the desire to capture better quality and to gain greater control over the look of what they are shooting.

Sometimes this transition can be a little rocky given that they have come from an almost fully automatic point and shoot world into what seems like an entirely different universe!

So to guide you through some of the basic differences and how to start getting the most out of your more advanced camera check the video below.

YouTube Power Tip That Every Creators Needs To Know

If you have followed my weekly roundups for any length of time you would probably be aware that I have two “go to” guys when it comes to all things YouTube.

Garnering any kind of success on YouTube of course comes down to having good quality content but even then the work has only just begun!

There is a whole world of technology to be learned on how to get your videos or video channel in front of viewers.

This week one of those guys, Derral Eves, is presenting as usual some very interesting content on how to achieve a better success rate on YouTube BUT!

Whilst Derral certainly knows his stuff, he is definitely a bit of a rambler when it comes to the spoken word!

You may have noticed that on this site I rarely if ever go into choosing video cameras or devices as a subject.

I do have a section on how to go about choosing a suitable camera but I definitely don’t make any specific recommendations.

The reason for this is that the overall camera market is just awash with products and as a one man band here I just don’t have the resources to deal with that many reviews!

On top of that the pace at which those products are being newly released, update or added to is rather breathtaking to say the least.

To make matters worse, within the total camera market there are numerous sub-niches covering cameras for specific purposes.

To that end I was approached this week by a blogger on the subject of choosing a camera specifically for vlogging.

After checking it out it looks to be a well thought out site with some good advice on the types of things you should be looking for when it comes to a camera specific to vlogging.