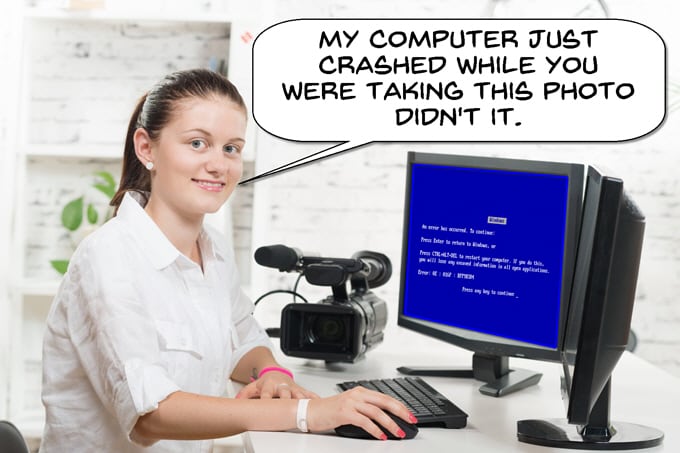 Came across this really good news article this week and just had to comment on it.

Probably for the past 6 years or so the introduction of high definition to the consumer video market has been both a curse and a blessing.

A blessing because of the great quality you can now get on even a simple video recording device like a smart phone.

And at the same time a curse because just when you thought the computing world was catching up to it all… the file formats changed and the computers dropped behind again!

So let me explain what the problem is here because it is most likely a problem you have experienced.

During the days of standard definition the most common recording method was through the camera and onto digital tape.

This resulted in pretty good quality and because of the compression used at that point you ended up with files that were very large but easy for a computer to handle in the editing stage.

The ease of editing part was a direct result of the compression being used.

That style of compression actually did what it suggested, it compressed the recorded digital information into a smaller space and as a result all of that information was retained.

The downside was that you ended up with huge video files to work with.

So in those days the main problems people were dealing with were simply hardware problems whereby you needed to make sure you had enough free space on your hard drive to store the files and enough RAM to be able to work with them.

By the time high definition came around most people were easily dealing with those older standard definition files because the computer hardware and software had totally caught up.

High definition required that new file formats be developed in order to deal with the increased amount of data that would be necessary to capture.

That was the beginning of the H.264 or MP4 era of very highly compressed files that gave great quality and by comparison to the old SD files, were incredibly small.

Now the assumption was that because these new files were smaller they would be easier to deal with in an editor… nope!

You see the way they achieved these smaller files was with a different type of compression and it is that compression that is the source of so many problems I see on this site every day.

Originally we were simply compressing the data into a smaller space to make the files themselves smaller, now we are into an era where compression actually means to throw stuff away completely.

The basic concept is quite simple.

The camera records the first frame as a full image.

This process of throwing away information that can be found in another frame forms the basis of the new types of compression and it can be up to 15 frames or so before the camera takes another full frame of image information.

For playback this puts a bit of a strain on any system being asked to do so because the software reading the video file has to continuously scan up and down the line to gather the information necessary to display that next frame.

The good news is that this is not too hard for the average computer or playback device these days.

The bad news is that for editing it is a nightmare for your system!

The sheer amount of work it has to do while you are scrubbing back and forth along the timeline is enormous.

This is the reason why so many new editors are trying to harness the processing power of the video card or anything else in the computer it can use to keep its head above water.

At the moment we have reached a point where things are relatively OK and as long as you don’t jump around too much and too quickly the average home computer can cope… just!

The one component that is holding the whole show back is the hard drive.

We have 64 bit computers and operating systems with matching software that are going a lot faster.

With the 64 bit architecture we have no limits on RAM so that’s good too.

The one thing that still operates slowly is the hard drive because lets face it, it is still a magnetic platter spinning around with a needle above it reading one bit at a time!

The answer to that?

Up until now they have been hellishly expensive and in fact still are pretty pricey but this week saw the first announcement I have seen that indicates that these drives will soon start to get cheaper and cheaper and eventually drop into the average consumer price range.

This is definitely not a video on how to make better videos!

But if you are interested in having your videos seen by anyone on YouTube you probably need to pay attention to this one.

The most effective strategy for getting found in search results both outside and inside the YouTube environment is by following some basic principles.

These principles follow very closely what YouTube and Google have laid out as offering them the best opportunity to understand your videos and their content and present them to a relevant audience.

Branding is a concept that most people tend to equate with big consumer brands like Coca-Cola but that is simple not the case.

Branding means to make your content identifiable across a number of platforms and in as many places as possible so that people can become aware of it.

For some great tips on branding for YouTube and for other services check out the video below.

Believe me, it is important to your success.

Found a good posting over on Techsmith this week on how to shoot and edit green screen.

I know I have covered this a few times before but a lot of people remain interested in the process and in my experience TechSmith give great tutorial.

There are quite a few videos they have included on the page and some pretty simple but clear instructions.

The one thing that I would caution when it comes to creating green screen projects is that 90% of the battle is in the shooting and not the editing.

In nearly every case the real problem they are having is not the software or the editing process.

The real problem has already been created at the shooting stage.

A simple example of this is shooting against a backdrop that has shadows.

If you shooting something against a green backdrop but the subject or something else is casting shadows on the screen then you are already asking for trouble.

It doesn’t know there is a shadow. All it really “sees” are two different greens.

One green where the light is hitting the screen directly and another green that is the shadow.

So when you try to key out the green you don’t have one green, you have two so the results get a little flaky.

How to Create a Tornado

OK admittedly the headline of “How to Make a Tornado” may not be everyone’s cup of tea but bear with me here cos’ I am going somewhere with this!

Easily the best way to learn to do stuff inside whatever video editing software you use is by actually doing stuff! It doesn’t matter if you mess it up or the results are utterly underwhelming because along the way two things tend to happen.

The first is that you will probably learn to do something you couldn’t do before and that’s got to be a good thing right?

The second thing is that by doing stuff you engage in repetition.

You repeat actions within that environment and by doing so you become more familiar with the interface and get faster at it.

The project in the video below is not so much an editing exercise.

It is more of a DIY exercise if anything but once you actually build the “tornado creator” you are immediately into the realm of shooting.

So if you follow the steps to build it you can them get some valuable practice filming your tornadoes and finally get to add your tornados into an editing project.

I think the learning possibilities here are enormous and because it is a start to finish project you will be a better cameraman, special effects guy and editor by the end.