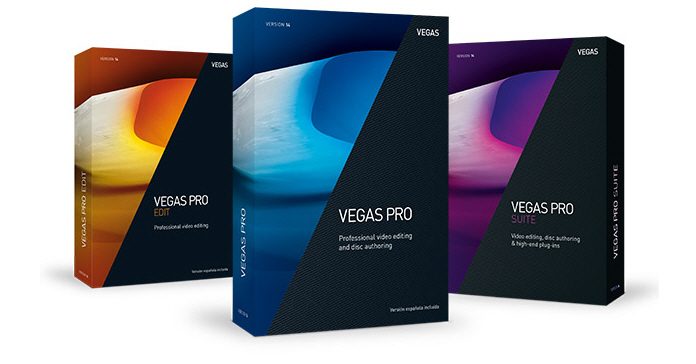 So this week I wanted to kick off with a bit of a change from me because I rarely get into all the discounting blah blah that is going on at any given time.

Generally speaking despite all the noise you get from promotions, marketing and advertising the reality is that most discounts on offer are actually already on the respective website of the software maker anyway!

However I was contacted by Magix this week and they informed me of a rather unusual offer at the moment.

I say “unusual” because what you will tend to find is that at the consumer end of the market there are regular promotions and discounts on offer throughout the year.

Conversely at the “pro” end of the market this rarely happens.

Most likely the reason for this is that Magix have only recently taken over the production of the Vegas range of software from Sony and are in the process of rebranding it.

I am sure they are trying to get the “Sony” part of the name pushed out of the picture as they take the software into the future.

They have rebranded everything under the Vegas Creative banner and so far have released their first update of the Vegas range.

In Order to get a little marketing push they are promoting a 25% discount on all their Vegas products.

To take a look for yourself just click the link below and remember you need to apply the HAPPY25 coupon code to get the discount.

If you are looking to go from the consumer level of editing up into the genuine pro level then this would be a good opportunity.

So, in searching around to check the Vegas discount I found a few others so I thought I would add them to this week’s mix as well.

Again from Magix they are offering through January some hefty discounts on their consumer level software which you can see here:

OK, that’s enough of the shameless discount selling for one week so let’s get on to some news!

Ok there is absolutely nothing educational or even tutorial (can you use tutorial as an adjective?) about the video below.

Aside form that it provides an amazing journey through what has become a truly incredible body of work over the years.

Just today WonderShare released an update to their easy to use video editing software package, Filmora.

I am including the release video this week and I hope to have an updated review done by mid week.

However from I have seen so far they have done a really good job.

They have added two new editing modes to the start up screen that are particularly interesting.

The first is where most of the changes and improvements have occurred and that’s the Action Cam Tools.

This is a separate module that you can go into when you are specifically editing action cam style footage and has group together all the most relevant tools necessary for those types of projects.

The other smart addition is the Quick Cutter.

Again a separate module designed for making quick cuts and merges to footage but I am not sure if they really understand how good this is!

One of the annoying tasks in editing is if you are taking a long video file and trying to isolate parts of it and have those isolated parts exported to separate files.

You have to load the file, isolate the part you want, delete all the other parts you don’t want, go to the Export/Render/Share module and start the output process making sure you have the same file properties as the original.

Tedious to say the least if you have a lot of “bits” you need to isolate.

The Quick Cutter allows you to just add a clip, mark in and mark out to isolate the bit you want, hit export and you are done.

You can then isolate another and export and another until you are finished.

Filmora by WonderShare Review Here or

You can see Filmora for yourself HERE

This a great introduction to video editing and what you are ultimately trying to do with your projects.

It covers some very simple points that determine whether your video will do want you want it to do or not.

This is the fourth video in the series covering some of the basic theory of using light both in a photographic setting.

The reason I have been including these videos in the Friday Roundups is because much of what we do in video owes its origins to the world of photography.

In fact if you have read any interviews with successful cinematographers ir video lighting directors you will consistently find they started off in the world of still images.

At a superficial level just a simple understanding of the way light is going to affect you final shot is a good thing to have.

However if you really understand the theory of light and the way it is determining how you shots look at any level you will be way ahead of the pack.

These tutorials are pretty straightforward, not too lighting geeky and pretty easy to absorb.

You don’t have to take notes and study them as a matter of life or death but they really give great insight into why things appear the way they do in your shots regardless as to whether you set them up or not.

The video is below and you can follow this link to the full article which has as usual, offers more detailed coverage of the subject.

One of the older arguments in the world of editing and computers in general is the that hoary old chestnut, Windows or Mac?

This one has been around since the dawn of graphics on computers and to be honest had been pretty easy to answer in the past.

Of course Macs are better.

However over the past few years this assumed superiority has begun to erode.

Probably the first real chinks in the argument began when Windows 7 was released and that hasn’t been helped from a Mac point of view with little to no development on their part in this area.

Admittedly Windows took a backwards step (as they are prone to do!) with Windows 8 but then got back on track again with Windows 10.

Now bear in mind I am not talking about general computer use here.

I am specifically talking about the assumption that Macs are better for graphics and video.

These days it seems to be an argument driven more by brand loyalty than actual real world experience and I expect it will go on for a while yet!

Anyway, here is one man’s experience in the subject.