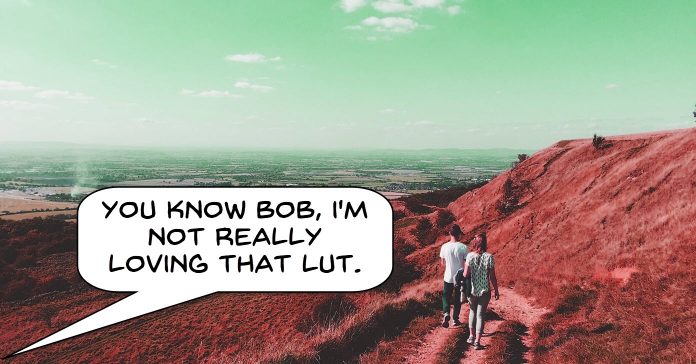 Now that we are mostly all big kids these days with editing software that can handle LUTs it is probably a good idea to work out how to use them and why you would want to.

One of primary ways LUTs are use professionally is to deploy the LUT on all or most of the footage so that in almost one go all of that footage has a similar look or feel.

One of the most common ones is the orange / teal look that many of you will be familiar with if you have seen a Hollywood movie in the past 20 years or so!

B-Roll Tutorial: How To Edit B-Roll, Shoot B-Roll & How To Use It

So no, I haven’t lost my mind here thinking that at an amateur or newbie level we are all going to go out and shoot endless hours of B-roll footage to incorporate into our home movies!

However there is an important lesson to be learnt when it comes to how and why the pro’s use B-roll.

First up B-roll is any footage that does not cover the main subjects of the video.

Generally it is used to give context, to add further understanding or to to illustrate a point.

If you are shooting the kids walking up a mountain trail that’s A-roll, if you then take some footage of the mountain and it’s surrounds without them in the picture, that’s B-roll.

Check out the video below for a great explanation of B-roll and how to intelligently incorporate the concept of it into your projects.

5 Transition Techniques You Can Do ALL IN CAMERA!

Further to the post somewhere else on this week’s Roundup on “in camera” transitions I wanted to add the video below.

It’s not just that it shows some great ways of transitioning while you are out shooting but also gives some excellent examples of transition you can do in an editor that will look so much better than “canned” ones.

Before we get into anything regarding shooting video in low light the absolute first thing you need to know is what exactly low light is.

In fact for many newcomers the definition can be a bit of a shocker!

So, low light would be about the amount of light you have in your living room with all the lights on.

If you go outside in the middle of the day and it is generally overcast but not dark as if a storm is coming that would be at the lower end of what normal lighting would consist of.

So when you choose a video camera or device and you are checking the low light capabilities bear in mind they are talking about the living room example or worse.

Having said that there are step you can take to minimize the effects of shooting in low light but more importantly there are some things you can do to actually embrace that low light and use it to your advantage.

There have been a number of rather unsettling developments over on YouTube especially for those who rely on YouTube revenue to make their living.

Most of it has come as a result of YouTube trying to algorithmically solve the problem of inappropriate content being accessed by children.

You have to look at it from YouTube’s point of view whereby the idea of them somehow manually inspecting and isolating unsuitable content would be near to impossible.

The sheer amount of video on the site would preclude that.

So they have tried to “train” their software to find and demonetize unsuitable content.

Of course as is and has been the case whenever YouTube tries this stuff there have been numerous innocent parties caught up in the cross-fire and just as usually, YouTube have remained utterly unresponsive to the carnage they have caused.

For many people this has been a pretty rude wake up call and has highlighted for them just how dependent they are on a service they have literally no control over.

For all the latest check out Tim Schmoyer’s take on it in the video below.

You had your tape based video camcorder, it shot in standard definition and everything had an aspect ratio of 4:3.

Then all of a sudden all hell broke loose!

We had widescreen introduced with 16:9 aspect ratio or old camcorders shooting in a kind of fake 16:9 using non-square pixel rendering, everything went high definition and you could even use you phone to record pretty good video.

As the dust began to settle a few tried and true rules began to emerge and one of those rules was that you must always shoot in landscape mode rather than portrait.

Sadly even that rule has now seemingly gone down the toilet!

Only recently most of the bigger video editing software companies introduced a portrait mode for projects settings to accommodate videos being shot that way for uploading to services like Instagram.

So to get yourself a little caught up on the subject check out the article below not just on aspect ratios but on your audiences reaction to them in their various forms.

Make Your Own Camera Transitions

Well I guess it really wouldn’t be a Friday Roundup unless I at least spent a little time railing against the dangers of using pre-packaged transitions in your projects.

Remember, nothing says amateur quite like the addition of cheesy transitions from your effects library!

So if you have used your straight cuts until they are boring, have added j-cuts and l-cuts until you are blue in the face and really can’t be bothered going all in and using a mask transition… why not make your own!

In the video below the creator demonstrates not just how to create truly unique transitions on your camera but also how to use them in perhaps ways you never thought of before.