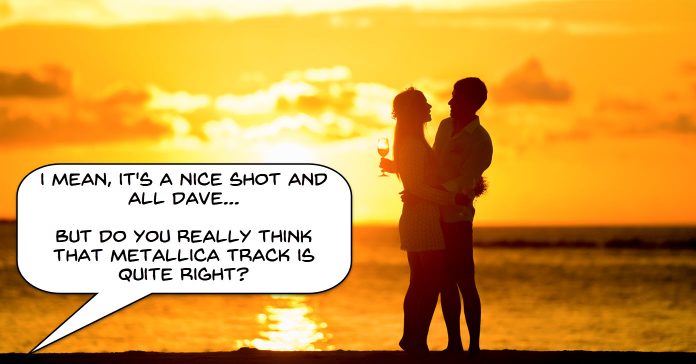 One of the best ways to add that little something extra to your projects is by the use of music.

One mistake I see over and over is that people tend to choose music on the basis of what they like which whilst totally understandable, can often lead to problems.

Choosing music for your videos has to be done on the basis of that music adding to the overall effect of the project and if chosen poorly can result in videos that range from the awful to the downright hilarious.

Audio, and that includes music is one of the most powerful ways that you can manipulate the emotion of video or how your audience is perceiving that video.

In the video below don’t be too interested in the technicalities of where the music came from or how it is being used.

Instead, pay particular attention to the caparisons within the video of various video clips being matched or tested with different music sequences and how that music changes your response to what you are seeing in the video.

OK, so it has been at least two weeks since I last went on a rant against the use pf prepackaged transitions in your projects.

That’s pretty good for me!

So this week I came across a video that covers a technique I have shown before but is well worth repeating.

If you take the time to watch just about any professionally produced video and pay particular attention to every cut between shots you will begin to notice that by far the most common is just a straight cut.

The problem is that if you then use just straight cuts in your own projects it somehow just never seems to work the way you saw it working in the pro video.

There is a very simple reason for that and that is that those straight cuts you were observing weren’t quite as “straight” as you thought.

In fact more often than not they are actually J cuts or L cuts and have just as much to do with the audio as they do with simply the images on the screen.

An L cut is when the video cuts to the next shot but the audio from the previous shot continues for a tiny amount time.

A J cut is the opposite where the audio from the next shot begins just prior to the image cutting to the next shot.

The real reason that these slight adjustments to the way you make a straight cut are so effective is that they mimic real life far more closely.

In real life if someone behind you speaks and then you turn your head to look at them you have just acted out a J cut.

In the same way if someone is referring to something or directing your attention to something and as you turn your head to look they are still talking you have just “lived” an L cut!

We are naturally seeing and hearing things all the time but we rarely have the sights and sounds of things working in perfect synchronization.

Check out the video below for some tips on creating J cuts and L cuts and as usual, ignore the editing program being used, it is the same action in all of them.

A Little More on Jump Cuts

So now let’s talk about a specific use of jump cuts.

One of the biggest rules of editing used to be that whenever you cut or transitioned from one shot that was similarly framed or similar in appearance to another, there had to be a change of view angle of more than 30 degrees.

If you did not do that then the resulting sequence would appear to be very unnatural and would be distracting to the audience.

That kind of edit was called a jump cut and it was a bad thing.

OK so that the rule!

There is another rule in shooting and editing video and that is that when there is a rule very often intentionally breaking that rule can actually create an effect in the audience that you want!

So that rule is that you have to follow the rules unless it makes sense to break the rules… easy!

There are certain times when intentionally using a jump cut can be very effective and one of them is in the case of speeding up motion or sequences in video.

Let us imagine we have a long shot of a police officer in a long hallway of an apartment building.

He enters at the far end of the hallway and is going to knock at every door in the hallway, wait for an answer, get no answer and then move to the next door until he has completed all of them.

In real time this would probably be five minutes of of pretty dull footage.

What we want to convey is that he knocked on all the doors right?

So by using jump cuts we just shoot the entire scene as one.

By employing jump cuts throughout the sequence the whole thing has been cut down to a manageable size and at the same time conveyed what was intended by the scene to the audience.

For a little more on using jump cuts to speed up sequences check out the video below.

Getting to Know White Balance

For most people and at most times the act of shooting video these days is going to be a run and shoot kind of affair.

That means an opportunity arises to shoot something and time or circumstances dictate that you switch your cam or phone on, point and shoot.

This type of shooting although awesome in the fact that we can do it does not really allow for much time in setting the camera up correctly or adjusting anything in particular.

It’s basically all on auto and we fire away. On those occasions where you do have the time for a little adjustment or setup before firing there really is one setting that you should at least try to get right.

That setting is the white balance and the reason for it is that a great many of the auto functions on your cam or phone are going to be based on this one foundation point.

It has an effect on the overall representation of color in your shots, the way that exposure is automatically set and can even have an effect on how fast your auto-focus can zero in on a subject or scene.

The article below covers in great detail the reason for white balance and how it affects your videos.

My advice would be that if there is one feature on your cam or phone that you could practice accessing and setting correctly REALLY fast then it would be the white balance.

I am adding this video because it is a good run through of using the particle designer in PowerDirector and at the same time a good tutorial on using particle generators in general.

Having said that I have to admit it is an effect that I wouldn’t particularly use but if you are into particles then here you go!

It is a good little checklist of things you should be watching out for with any portable device to avoid those moments when you suddenly realize you should have done that earlier!

A Note on 4K Rendering and Editing Problems

And finally, an enquiry relating to Filmora and handling 4K videos that I wanted to address broadly because it is one that keeps coming up.

Although the user in question seemed to have a reasonably endowed computer he was still having a choppy editing experience.

The result of this was that it was very difficult for him to know exactly where and how his edits we being positioned on the timeline.

It wasn’t until he completely rendered the entire project that he could actually see if everything was OK or not.

Understandably he felt that was a little late in the process to be finally finding out!

His query to Wondershare on it resulted in this response:

“Thanks for contacting us.

According to your description, we assume it is caused by the lack of the decoding efficiency.

Regardless of what editing you made, such as split a video, to show you the prompt result in the preview window, our program has to render it first.

But since the timeline engine is not efficient enough, so the non-synced problem occurred.

I regret to tell you that we do not have a solution to fix it now. But generally the output quality will not be affected.

To work around, please render the whole project before editing or playing and see if you get a smoother playback.”

Here’s my reply to the original user after reading that.

OK, so I have read the response from Wondershare and it pretty much sums up the situation for most editing software at the consumer level of the market at present.

The answer they have provided you with in relation to having a rough or choppy editing experience is the one off their website but I think you have kind of gotten hold of the wrong end of the stick.

Wondershare are not saying that the decoding inefficiency is as a result of their software as such.

The inefficiency they are talking about pertains to the H.264 codec itself and this is by no means Wondershare’s fault.

The actual perpetrators of that codec are the Motion Picture Editors Group members (MPEG) and it is they who design and maintain complete control over all MPEG codecs going back to MPEG1.

In designing and creating that codec they focused entirely on image quality, motion quality and files size.

Those factors were figured in to the codec on the basis of capturing video (in camera) and distributing video across various platforms.

Just as you would expect a committee to design a horse and end up with a camel, the MPEG consortium at no time considered the question of editing those files.

As a result you have all the editing software makers struggling to deal with these annoying file types.

In a nutshell the H.264 codec achieves its compression by throwing data away then later expecting the computer to retrieve that missing data from other parts of the overall file on the fly.

That’s all very well for playback but when it gets down to editing, things begin to get really stressed!

All of this was pretty much under control even through to the high definition era as long as you had a reasonably well endowed computer, however he excrement hit the rotary oscillator when 4K video arrived on the scene.

That is why if you are working with CyberLink PowerDirector, Magix Movie Edit Pro, Corel VideoStudio and pretty much all the rest, they all offer some kind of proxy file solution to the user.

In PowerDirector they are called Shadow Files in Corel they are called Proxy files but essentially they are the same thing, low resolution copies of the HD files that can be used to edit with so as to make that editing experience a smoother one.

In just about every one of those programs the second you even look at a 4K video file they will offer you the option to create proxy files because they know already things are heading towards a bad experience!

Wondershare in Filmora provide a solution to the problem through the use of the pre-rendering feature and probably they would be better off with a straight proxy file solution but there you go, horses for courses!

Theoretically we will all be better off when the H.265 codec becomes the new Prom queen but given that it was designed under the auspices of the same consortium, you won’t catch me holding my breath!