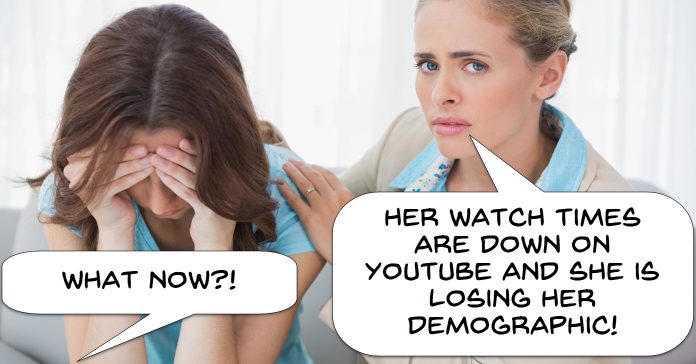 How To Structure Your Videos For More Watch Time

Although the video below was intended specifically for YouTube creators I think it has a lot to offer the average person in terms of how you and I create our own projects.

I think one of the first concepts that tends to go out the window when you are immersed in an editing project is that of the viewer’s perspective.

Too often I see videos produced by people where it is easy to see that they have become so involved in the editing process that they have forgotten that point.

I always include videos posted by John Luna in the Friday Roundup when they become available.

Although he targets his tutorials and tips slightly more towards the pro or at least aspiring pro end of the market there is always something interesting and worthwhile in his videos for any level of video maker.

This week he has some great tips for video making in general including some solid advice on frame rates as they apply to using your footage for slow motion effects.

How to Make Money in Retirement on YouTube — 4 Tips

With the number of active users on YouTube now numbering in the billions it is surprising to note how few older people are actually involved in making content.

That isn’t to say that no-one is doing it but it is very easy to fall into the idea that it is somehow “only for the kids!”

5 TIPS for a CINEMATIC Travel Video

OK there are a couple of things I need to point out before you check out the video below.

The first thing is, GEEZ! Could this guy get any more annoying with the strange over-enthusiasm stuff!

Secondly, GEEZ! will he ever just shut-up and get on with the actual tips!

Now that I have that out of the way these are actually some good tips for travel type videos and for the home movie maker that includes outings and holidays.

If you want to lessen the annoyance factor created by the presenter you can skip to the 2min. 17sec mark to get to the good stuff.

PowerDirector – Customize and Save Motion Presets

Way back in the day one of the major breakthroughs that heralded consumer video editing software stepping up into the more pro levels was the introduction of moving paths.

A moving path is simple a series of markers that dictate the movement of an overlayed object on to an underlying video.

Previously only the very top end of the market could execute anything like that.

With the introduction of moving paths amateur video makers could have objects such as text or titles, images or even other videos “follow” things in the main video track.

This feature has undergone steady improvement since it was first introduced and these days has become quite a sophisticated module in most fully loaded video editing software.

In fact many editing programs these days offer automatic tracking of moving objects in a given video and convert that tracking into a moving path.

If you have never delved into the Motion Paths or Custom Motion capabilities of your particular software you really should check it out.

In the video below there is a demonstration of the module in CyberLink PowerDirector.

Don’t worry if you do not have that particular brand of software. In most cases even though the names of a few things may be slightly different the basic concepts are exactly the same.

Most video editing software will allow you to speed up or slow down your footage and provided you have shot that footage correctly you can get away with a fair level of adjustment in that regard.

However it is important to keep in mind that when you are going for slow motion there is only so far you can take it before the motion in the video deteriorates noticeably.

That;s the main reason modern action cameras have the ability to shoot at 60 or even 120 frames per second.

It allows for you to shoot at 120fps then pull that footage into a 30fps project and slow it way down yet still retain the original quality.

The problem with using simple a speed up and slow down effect application to clips in a project is that they tend to look kind of amateurish.

All you really get a is normal motion, fast or slow motion then normal motion again which in reality in kind of jarring to the viewer.

A far more effective way to use the ability to change the speed of the clip is called Speed Ramping.

Speed ramping is the process of changing the speed of a clip during that clip’s playback so you get a far smoother effect which can greatly enhance what is showing on the screen.

The video below covers most of the basic concepts of speeding up, slowing down and speed ramping video clips.

The software used is I think the Adobe product but most of the features are present in other video editing software.

The only important term I noticed is different is the word “Ramp.”

In Adobe they use that word to describe the action of increasing or deceasing the speed gradiently rather than suddenly and in most other software I have checked the terms “Ease In” and “Ease Out” are used.

A few weeks back I posted a complete run through of how to debug problems that average user may run into when using video editing software.

This week I came across a video that is a similar run through of steps to take when you are having trouble with audio in a project or with video in general.

Because of the interplay between your video editing software’s audio functions and the audio functions of the operating system you are using, these problems can often be a tad frustrating to deal with.

The general rule for debugging anything like this is to check all the relevant settings in the software itself first.

This is to ensure that you haven’t inadvertently flicked a switch somewhere in there causing the audio to mute.

Next step is to check that the file giving problems actually has audio!

You can do that by using any other software you have to play the file and make sure.

Finally you can then go into the operating system’s settings and again, make sure that somehow the audio has not been crippled in any way.

This week Corel posted a few videos on their YouTube Channel covering a few of the features in VideoStudio.

They are not long tutorials on any of them but simply quick demos of how to access the feature from within the user interface and showing some of the basic settings.

The one below covers the Enhance Color module whilst the others show the Add text module, the Split Audio function and how to Rotate Video.