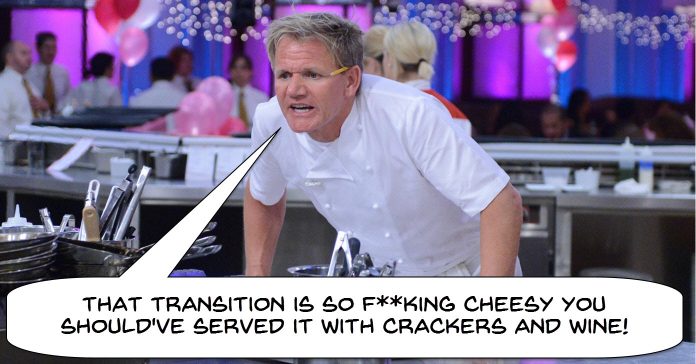 One of the biggest selling points you will find at the consumer end of the video editing software market is the inclusion of a gazillion transitions.

Even potential buyers who have no idea really what transitions are get all excited by the prospect of getting just a bucketload of the things cos’ that gotta be good right? Wrong!

The real definition of transition in video editing is the process by which we go from one shot to the next.

It is a method or a system of carrying out the necessary task of moving the audience on to the next scene.

This term has somehow morphed over the years into a description of a preset pre-packaged little insert that you place in between your two shots that is supposed to carry out the function described above.

The reality is that at a professional level there are two main transitions used.

The first is the straight cut which is essentially no transition at all because it is unnecessary.

The second is a fade of some description where one scene crossfades to the next or fades through black and then to the next scene.

A variation on that is the fade through white which causes a kind of flash effect.

This one was made popular by CSI Miami but has since become so overused that I even had someone on Twitter ask me to announce to world to stop using it!

All other transitions at a pro level are generally constructed in the editing room using the end and beginnings of the two clips in question.

What they definitely don’t do is grab some cheesy pre-packed transition out of their effects library and slap it onto the timeline between the two.

Sometimes the differences between pro and amatuer level video can be down to the tiniest of details, yet attention to those details can create a stunning effect.

To give you an idea of how professionals approach the task of transitioning I have added the video below.

This video shows the process in Adobe After Effects but don’t let that fool you.

CyberLink PowerDirector, Corel VideoStudio, Sony Vegas Movie Studio, Magix Movie Edit Pro and Pinnacle Studio all have the necessary tools to do what you see being done in the video.

If you watch this video below apart from the fact hat it is fascinating, it will give you great insight into some of the techniques the pro’s use to achieve their vision.

And if go far enough into it, just around the time you begin to think that even though it is awesome and you could never do it, the director in question makes one stunning statement.

If you have video editing software on your computer, at just about eny level, you could recreate the effects in Sin City.

So the next time you are thinking you need that extra set of filters, or that better cam or that professional editing software… think again.

To me one of the great video projects that anyone can engage in is a family history video.

I think that in these days of easy access to high quality cameras and editing software this should be one that everyone takes a serious look at.

The thing that prompted me to raise this subject now was that I was having a conversation with my mother the other day about various long departed members of the family.

We were discussing my uncle who was rather an enigmatic figure and I was asking about why he never married at a time when that was pretty much expected.

She then proceeded to calmly tell me the whole story which involved a showgirl and the fact that he was “shacked up” (her words!) with her for years and there was heartbreak at the end and family drama and the whole shebang.

Not about the showgirl and being shacked up, but at the fact that for the first time in my life I found out something about my family history that wasn’t completely vanilla middle class!

Very often it is not until later in life that the senior members of the family start to see past events in a different light and become far more willing to discuss them.

These make awesome interview style videos that you can keep and pass along forever.

Here are a fw tips to get them right.

OK, so the tired old phrase that gets bandied about over and over is that the most important part of video is audio.

Of course the reason for that is that the most important part of video is audio! If you take a look at any professionally produced video project and then take a look at a reasonably well produced amateur video, finding the difference between the two becomes quite difficult.

That’s because the differences can be very small and visually difficult to spot.

When you see all sorts of tips and tutorials on shooting and editing better videos they are all working towards one main goal.

That goal is to place the viewer inside the video.

It is that elusive effect of placing the viewer in the action rather than being an observer of the action.

That’s why for me, horror movies never work.

I can never get past that point of suspending belief enough to get invested in what is going on and in fact all that ever happens when I do watch horror is that I get annoyed at the characters!

I remember walking out of the first Alien movie and all I could think of was, “Forget the damn cat!”

Anyway, there are obviously advanced techniques in shooting and editing that get your audience “in” to the video but one of the most hidden aspects that will keep them “out” is audio.

If you are watching something on screen and that thing is located near to you but at the same time the audio makes it seem it is away from you then you will feel separated from it.

Just as much as your choice of shots can affect how the audience is perceiving the action, in the same way your audio can either conform or detract from that intended effect.

So the ongoing saga seems to be continuing over on YouTube with regards to advertising on certain content, backlashes by the advertisers and content creators seeing huge drops in revenue.

The video below gives a bit more detail to the current situation but I think the most telling point made by Derral in it is that the underlying problem is that YouTube has no competition.

One can only hope that Google and FaceBook get their acts together with regards to online video to create a bit of a shake up here.

Of course the untold story throughout most of this is the way the New York Times has been so actively stirring the pot in the background and more importantly, why.

Another cool video this week from Film Riot which mercifully is not so annoying in its presentation that you can actually take in the tips!

These are all simple DIY ideas which can allow you to create certain effects within your projects that down really cost a fortune.

Taping some fishing line across the front of your lens to create an anamorphic lens flare effect.

Using a fog machine coupled with some dry ice to create a blanket of fog that stays on the ground reasonable well.

How to create the effect of something being shot at a busy party when you don’t have a party’s worth of people.

And finally using a shower curtain to create a cheap light diffuser.

In keeping with what seems to be the emerging theme of this week’s roundup the video below covers the subject of adding images and artwork to your YouTube Channel.

Despite the recent rumblings on YouTube with regards to payments to creators and advertisers pulling out en mass one fact remains.

YouTube is still pretty much the only game in town when it comes to trying to build a business around online videos.

Although FaceBook and Google seem to have been “gearing up” to take them on for a while now the process has been very slow and in the case of FaceBook, doesn’t really offer that much to the video creator.

In light of that the competition on YouTube is just as fierce as it has ever been and until a reasonable alternative comes along, it is what we are stuck with!

On this website I don’t particularly concentrate on this aspect of video production because let’s face it, it is an entire subject unto itself.

However it bears repeating that the only real way to succeed on YouTube is by understanding the basic rules of engagement and following them to the letter.

You can at least get yourself up to pace on those rules by going through my series on Getting Your Videos Online for starters.

Just don’t get lulled into the idea that once you do those things you will be going viral overnight and raking in the big bucks.

Of course there will always be stories of some guy that just slapped up a video, it goes viral and YouTube stardom ensues.

If you could isolate a strategy that makes the concept of sheer dumb luck repeatable then sure!

But for the rest of us it is not just down to the daily grind, it is a matter of excelling in every aspect of what you can do and control when it comes to your channel on YouTube.