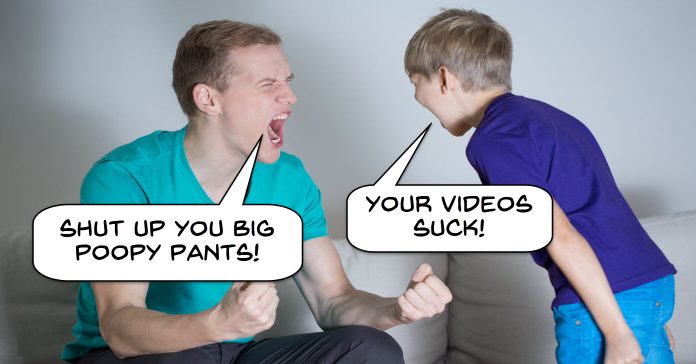 Do Video Down Votes and Criticism Matter?

The video below is not directly concerning how to shoot or create videos in any way but I think it conveys an important message to anyone who is engaged in the process of creating videos for others to see.

There is an old theory about how things work in the universe, how stuff divides up, how people act and on and on.

It’s called the 80/20 theory and it works kind of like this.

There are thousands and thousands of examples in the world where things just tend to break up into an 80/20 proposition.

So when you are making videos for others to view you can be pretty certain that there will always be a 20% portion of your audience that no matter what you do, will somehow find a way to be negative about it.

It is just the way it is and if you start to look at that 20% only, then you will soon give up in despair!

There is another old rule in the online world and that one is, “Never feed the trolls,” but on the other hand if you don’t read criticism how are you going to get better?

Here’s a strategy you can use to safely (most of the time!) navigate you way through it all.

First up the 80% who either like what you do or don’t say much at all.

For these ones just move along and assume that you at least managed to achieve a level of engagement that was satisfactory.

Look carefully at each criticism and it will be very clear, very fast as to whether the author has the intention of helping you or just tearing you down.

Take the constructive criticism on-board and ignore the rest.

How To Make Boring Footage Exciting!

OK, I kind of love this video from John Luna this week.

This is for a very specific situation I am sure we have all been in.

You go out to an event or gathering or whatever where you know you can get some great footage.

You get that great footage and are feeling pretty damn pleased with yourself.

You load that footage into your video editor and to your surprise it’s all kind of… well boring!

Here are some tips for at least making a partial recovery from the disaster.

Handheld Camera Gimbals: Does a Filmmaker Need One?

With the introduction of easily accessible high definition recording devices for video a few things really changed in the world of shooting videos.

The first has been the intense development of auto-focus features on cameras and devices due to the unforgiving nature of high definition footage.

The other thing that changed dramatically was the concept of using handheld footage.

With the older standard definition devices there was at least a little wriggle room when it came to handheld footage and very often due to the file formats being used, you could go a long way correcting it in software.

With high definition that all changed and just like an out of focus shot, nothing was hidden!

So now were are pretty much in the age of having to use tripods, gimbals or whatever in order to at least minimize the inevitable camera shake you get in high definition.

The question is this, “Do we ALWAYS need to be shooting with some kind of mechanical or software stabilization in play?”

The answer to that question is of course yes… and no!

Check out the video below for a great run through of scenes and situations where a gimbal, a tripod or hand held can dramatically change the feel of the footage being shot.

And check here for some solid advice on choosing a gimbal for an iPhone.

OK so for most of us the idea of choosing an aspect ratio is a pretty straightforward process.

If we are shooting with the ultimate goal of burning a disc, uploading to YouTube or having a video playback on a TV then it is 16:9 widescreen shooting in landscape (horizontal) all the way!

If we are going for some kind of different social media platform as the target then it is shooting portrait and the aspect ratio is 9:16… simple!

Interestingly there are many, many other aspect ratios used in the movie industry and for many reasons… check it out here.

PowerDirector – Using Multicam with the Video Collage Designer in PD 17

CyberLink recently unleashed their latest version of PowerDirector 17 onto the world and although the release didn’t really add anything dramatically new they certainly added a bunch of enhancements to existing features.

One of those was to connect the multicam editor to the collage designer which makes perfect sense.

The multicam editor is an interface that allows you to load a bunch of videos simultaneously to a timeline and have them all playback at once.

Whilst they are playing back you can then “switch” from video to video as you see fit very much in the way a director switches from camera to camera at a live TV event.

All your “switches” are noted and then the whole sequence loads into the main editing timeline for further editing.

One of the most common uses of the multicam editing interface is to create montage types of videos.

On the other hand the collage designer allows you to create all sorts of split screen effects with multiple clips.

The most obvious source of these collections of clips was always… the multicam editor!

The problem was that these two modules could not talk to each other so the whole process had to become quite a long series of steps to get from one to the other.

In PowerDirector 17 both of these modules have been integrated so that you can go from one to the other with ease.

Probably the two biggest upgrades with the recent release of CyberLink PowerDirector 17 were the enhanced audio editing module and the ability to use nested projects.

The video below is a complete run through of the nested projects feature and should give you an idea of why I think it is such an important upgrade.

OK so back in August Corel released Pinnacle Studio 22 to the world with the usual marketing fanfare.

So here we are in October and for some strange reason they have finally gotten around to putting together a video on what is (was?) new in Pinnacle Studio 22!

Not really sure why there was such a gap between these events but hey, I guess better late than never!

This is just a quick tutorial from the guys at Filmora on creating thumbnails for YouTube videos.

These days most video editing software will offer the ability to create still images from just about anywhere on the timeline so it is just too easy not to do it.

As YouTube has become more and more crowded over the years and as the difficulty of attracting views has become harder, taking the time to create interesting thumbnails should be by now a no-brainer.

Recording Your iPhone and iPad Screen While Recording

This is just a quick “How to” tip on recording your iPhone screen in action and saving it to a video file.

The video itself only covers iPhones but the same effect can be achieved on an Android device the only difference being you have to have an APP for it.