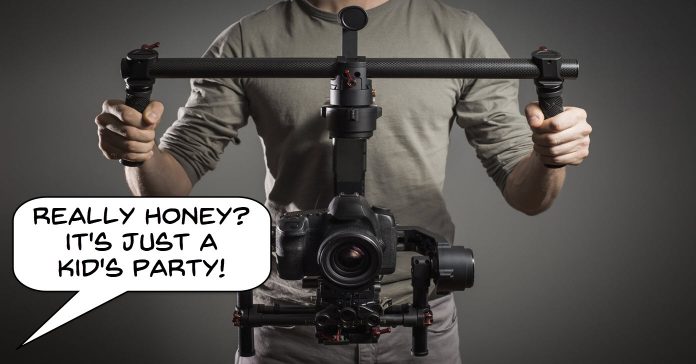 I have a friend (surprising I know!), he is a Director of Photography or Cinematographer at the top of the film making food chain.

He has worked for many years on major Hollywood movies and a whole range of high end projects.

He also teaches these days at one of the top film schools in the world.

He began his career nearly 40 years ago in the world of film making when they actually used film!

Since then he has transitioned into the world of digital media and all that it compasses.

When it comes to video equipment and gadgets he absolutely loves his toys and is endlessly getting a hold of the latest whizzbang thingy on offer.

But here’s something else I know about him and this is the most important part.

I know that I could dig out my old Sony point and shoot Mini DV cam that records, on to DV tape (Google it kids), restrict him to a consumer grade computer loaded with consumer grade video editing software and provide him with no other equipment and guess what?

He would still be bale to create something amazing.

Now in fairness there would probably be a heap of salty language accompanying the entire process but still, he would get it done and you would be amazed.

The point I am making here is that the world of technology and the marketing of that technology very powerfully implants into us the idea that it is the technology that is the driving force.

That without the technology we are hampered or even disabled in our ability to create something.

But this is a lie.

Yes, a certain level of technology is necessary but the idea that we have to have the latest and greatest or the most feature rich version or whatever in order to create something is absolute rubbish.

If you are having trouble executing your plan with what you have then before you go searching for that “latest and greatest,” take the time to thoroughly explore (and I mean thoroughly) what you have.

You may very well find that the only investment you have to make is your time and effort.

Most video editor have more than enough capability to create a split screen effect.

But like most tools and features when it comes to editing the question remain as to whether you should actually do it!

Incorporating a split screen is like just about anything in editing, done right it can enhance your viewer’s experience, done wrong and it just add a distraction which at best can be confusing and at worst downright annoying.

The tutorial below goes into how to shoot specifically for a split screen and also offers some advice as to why or when you may want to use it.

In my opinion the most important message here is that split screen is probable something you may want to plan for in advance rather then be something you suddenly decide to add when you are at the editing stage.

A Guide to Video Interlacing

One aspect of video shooting and video editing that is fast disappearing due to more modern technology is interlaced video.

Interlacing is a sort of carry over from the early days of video when it was largely confined to television transmissions and is the action of creating two incomplete images (fields) in order to display one complete image.

Sounds a bit wacky these days but at the time it was a solution to a basic problem.

This is what created the images on the screen.

The problem was that the phosphorus point would only keep emitting light for so long before it began to fade out.

So by the time the electron gun had worked its way line by line down the entire screen, the whole top section of the screen would be showing no picture!

To compensate for that, a system was developed so that the electron gun would fire line one first, then line three, then line five etc. all the way to the bottom then start back at the top at line two, four six etc.

In this way the apparency of a complete picture was created and the flickering caused was eliminated.

Of course once modern screens were invented that didn’t rely on the electron gun scanning system the whole interlacing thing became redundant.

However that has only occurred in the past ten or so years and many, many people still have enormous troves of video recorded using the interlacing system.

Deinterlacing existing material would seem to be a pretty simple task, just slap it all back together and we are done right?

Given that there can be variations in whether or not the original video was recorded top field first or lower field first and that additionally each field was recorded at a different moment in time, it’s not always a walk in the park.

In light of that I wanted to add as a permanent marker here, a series of videos that have been recently added to YouTube.

These videos were originally the basis of a course on Lynda.com but given their relative lack or importance to new users they have been archived.

Now I haven’t linked to the actual playlist on YouTube for a reason.

Much of what is in this series is outdated and it is easy to get confused by some of the information unless you get some context with it.

So the link below goes to a page that has the videos on it but more importantly has explanatory notes prior to each one to guide you through.

If you need to process some older video footage or are embarking on an archiving project with interlaced video then it might be a good idea to bookmark the page so you can use it as a reference guide to handle any problems you may run into.

Some of you at some time may find yourselves in the unenviable position of having to video and record some kind of live performance.

I am not talking about a 50,000 seat arena but a live performance nonetheless.

In the article below there are some great tips for 50,000 seat arenas but i think you can safely ignore them!

Instead turn you attention to some of the tips that apply regardless of the setting to make the job easier and perhaps get some great results.

Well it never really hurts to go back over the basics so in light of that here are two video demonstrations for CyberLink PowerDirector and Pinnacle Studio.

It is interesting to note that these days there is very little difference in the way most video editors go about the same tasks.

Sure the little button may look a bit different or the name of the function may not be identical but when it comes down to it we are hardly talking about a huge change.

One of the points I make often to people asking for advice is that most video editing software at a given price point will be almost identical to any other and the differences are only minuscule.

In fact if you are engaged in the search for video editing software ta then moment it is pretty hard to go wrong!

As long as you stick to the known brands and use the trials to make sure you computer likes it, you should be good to go!

One of my “go to” guys when it comes to running and building a YouTube channel is Tim Schmoyer.

I don’t pretend to be an expert on YouTube itself and I am certainly not someone who talks from the standpoint of being successful.

Although technically I have a good grasp of the basics of creating a presence on YouTube, that’s about where it all ends.

On the other hand Tim Schmoyer certainly does, so if you are interested in pursuing a career on YouTube or want to get started then this is the guy to go to.

The video below is a specific announcement regarding a top end Mastermind workshop he and a few others will be presenting so let me just make this clear.

If you already are running a reasonably well patronized channel on YouTube and want to take it all up a notch then this is definitely for you.

However if you are just starting out then I would strongly advise you just go over to Tim’s channel and check out his getting started course for the beginner.

It is the best way I know of to avoid all the rookie mistakes and the endless waste of time doing things that are unimportant and focusing on what you really need to do.