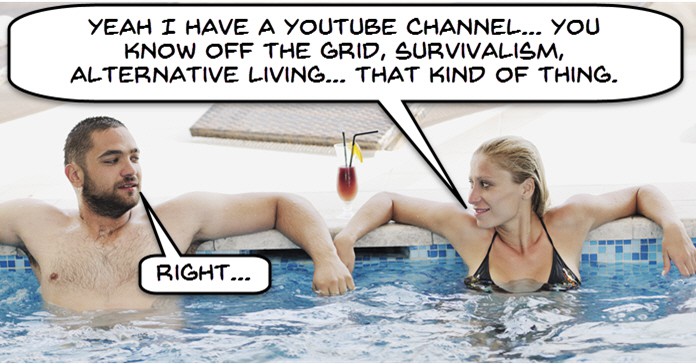 One thing I see a lot of in many online videos are video projects that are pretty good in what they are presenting but they fall down on some very simple points that are easy to fix.

Given that video is a visual experience you would think that people would be aware of the need to appear a certain way.

Just as much as the video itself has to be clear and looking good, anyone that appears in that video should also be prepped to continue in that vein.

If you are looking at a guy demonstrating a cooking technique and although his work area looks fine and his shooting is all fine yet he himself looks like he lives on the streets then the viewer is not going to be focussing on the cooking!

Things like some simple lighting improvements, the clothes you wear, the camera setup and what is in the background can all affect the overall “feel” the viewer gets when watching your video.

A new video this week from the Basic Filmmaker over on his YouTube covering some simple information on recording sound.

I know I probably harp on about this subject to the point of becoming boring but it really does bear reinforcing.

One of the first things that will stop you in your tracks when starting out with video will be that moment when you have shot your first footage, pulled it back into a computer for editing and there it will be.

That sense of shock at the a poor quality of the sound and just how much it makes the video unwatchable.

The reality is that as soon as bad sound hits the viewer’s ears, his eyes and other sense seem to just shut down and all of his attention will be on that sound.

You don’t have to go way upmarket and buy a bunch of audio equipment to deal with it but you do have to develop a sense of the audio being “a thing” that needs to be attended to and not just left alone in the hopes that it will be OK.

One of the ways that you can help YouTube understand better the contents of your videos on that site is by the use of effective titles, tags and descriptions.

In fact YouTube relies quite heavily on those factors much more than other more traditional search engines seeking to index and sort the internet in general.

The reason for this is that YouTube has no way of actually “seeing” what you video is about so they tend to rely on the titles. tags and descriptions to at least go with the concept that they “think” that’s what the video may be about.

Of course they use a whole range of other factors including the amount of watch time, shares, likes and all the rest of it to try to make a judgement as to whether they should serve that video in a search result or as a recommendation at the end of another video.

The video below goes into a little detail on that subject but also offers a great tip on optimizing your videos for foreign language users.

Most people tend to think that if their video is in English then only English speakers will be the target audience.

However the reality is that there are literally millions of YouTube users who are located in parts of the world where English is not the native language BUT, it is certainly a widely used and well understood second language.

To take full advantage of this international market you could get you videos translated for a fee.

But if paying is out of the question, one way to get yourself in front of that international language is to translate your titles, tags and descriptions only.

Yes, you may find there are people that just don’t speak the language, but what you may also find is that a surprisingly large number of those people are perfectly fine to listen to a video in English.

One of the oft touted features of many top end consumer video editing software programs is that if the ability to handle time lapse videos.

I put this one in the same category as green screen.

Both are great features to have in any video editing suite but the problem is that the ability of the software to handle the tasks needed is not really the “meat and potatoes” of the process.

The truth is that creating both green screen and time lapse is completely dependant on knowing what you are doing at the shooting stage of the process and only a little to do with the editing stage.

If you shoot footage against a green screen that is poorly or unevenly lit you are not going to get the results you were hoping for regardless of which software you are using.

The key to time lapse is in the way you shoot the original images, how they are framed, lit, stabilized and most importantly, at what intervals you are capturing each shot.

After that, adding those images into an editor is not really all that complex.

Check out the article linked below of a better understanding of time lapse intervals and how they affect the final video project.

I am so glad I found this video!

OK, so the deal is that within CyberLink PowerDirector there are basically three choices you can make when the program opens.

To be honest I have never really investigated anything other than the full editor myself very much although I have given the easy mode a run through.

My thoughts on this are that if I wanted and easy video editor or and automatic video editing solution I would not be using CyberLink PowerDirector!

Anyhoo, on the one or two times I have ventured into the Magic Movie Wizard I have to admit I found it all rather confusing which seemed to me to be rather counter-intuitive to the idea of it being there in the first place!

So finally this week I found a video that steps you through the process of using this feature if that is your want.

Elsewhere in this week’s Roundup I have written a bit of a blurb about the changes being made on the Vine video platform but another of these wildly popular sites that has introduced video is Instagram.

What is notable about Instagram is that of all the social media sites around these days Instagram boasts the highest user engagement of all of them.

The importance of this should not be underestimated.

There may be bigger social networks around (and there are) but the degree to which the people on those networks engage with each other and the content being uploaded or shared is a vital factor in that network’s value.

YouTube for example is a behemoth when it comes to both numbers of subscribers and the sheer amount of content being uploaded on an hourly basis.

However as anyone who has ever tried to get some attention on that platform would know, getting actual engagement with an audience is very difficult.

Subscribing, sharing and liking were never really built in to the platform’s DNA and most likely because they came as later developments, are not natural actions for users to take.

On the other hand Instagram has been that way from the get go so high levels of engagement and interaction are the norm.

It is because of this that if you are starting out with video or are really having trouble gaining traction on YouTube you may want to take a look at some of these other, more social, video platforms as a way of garnering an audience.

Over on the Vine blog this week they made an announcement that I think is a pretty interesting development in the history of that site.

For anyone unfamiliar with Vine it is essentially a video sharing site but in this case with a real difference.

A “Vine” is a video that has a maximum running time of six seconds.

Now if you are thinking to yourself that sounds crazy I would advise you to head over there and take a look at what you can achieve in six seconds of video!

Vine has been very successful and I think that comes down to two main points.

The first is that it satisfies the modern user’s habit of consuming content quickly and in an abbreviated form.

Instagram does the same thing only with still images.

You can just scroll through and stop to check something out only when you are interested.

Vine offers the same experience only with videos.

The second reason I think it has worked is because of the kind of “pressure cooker” effect that six second limit has on video creators.

In order to get something made you need to have a very clear concept of what you will be making and that concept has to be very precisely realized in both the shooting and editing.

Over time this effect has resulted in huge numbers of Vine creators honing their skills to a very high level all the while driving the creative aspect of those users.

As I mentioned at the start of this, this week they announced something new.

That change is that moving forward users will also be able to create an upload videos of up to 140 seconds and in some cases even up to ten minutes.

However they have done it in a really smart way so that Vine doesn’t just become a kind of “short form” YouTube.

Whilst users can certainly create and upload the longer format videos, those videos will not appear in the end users timeline stream.

In order for someone to see you longer version you still have to produce a six second or less video and that video will point to the longer one.

So when the short video appears in your timeline you can watch it and if you feel interested click the new Watch More button and you are taken to the longer video.