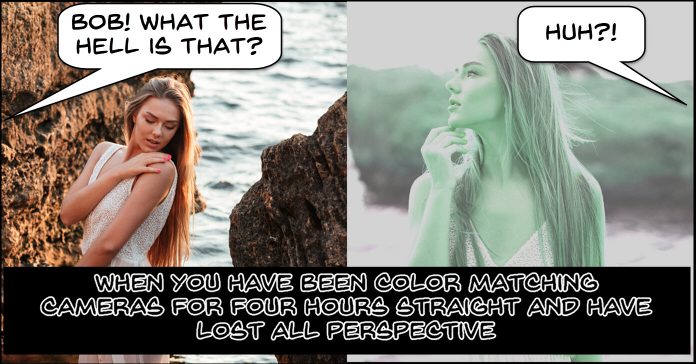 Late last year a few of the usual suspects in the world of consumer level video editing began introducing “shot match” modules into their respective editors.

The driving force behind this was that more and more people were putting together projects in which they had access to footage from more than one camera.

Given that a lot of this footage would have been coming from smart phones as well as a wide variety of both video and still cameras, the variations in the overall “look” of the footage were quite noticeable.

These large differences color, contrast, white balance etc. made any project executed with them very amateurish looking and for the viewer a bit confusing.

When we humans look at a video and are presented with a noticeable change in the look of the images we are being presented with, we naturally assume there has been a change of scene, or subject or time or whatever.

So if we have sots inside a living room at a party and those shots keep displaying huge differences in how they look, every time that happens the viewer thinks that may be at another party in another living room!

So to counter this we have seen the emergence of the shot match feature which simply analyses a shot from one camera and attempts to apply changes to the shots from a second or third camera in order to get them all matching and looking as though they came form the same source.

Whilst nowhere near perfect, these automatic solutions are reasonably good and can work well in many situations.

I think as we move forward they will get better and better but in the meantime and if you are wondering why an automatic solution hasn’t appeared that works perfectly every time, take a look at the video below.

This is a complete run through of how it has to be done manually.

I guess one of the hidden downsides to the vast capabilities offered by modern video editing software is that you can do things that only pure professionals could do in the past.

That may seem a bit of a strange thing to say but bear with me, I going somewhere with this!

Up until the advent of digital video and digital editing of that footage, effects in movies had to be very well thought out and have a specific purpose in order to justify the expense of executing them.

Underlying this was a knowledge and understanding of exactly how that effect or editing choice would affect and hopefully enhance the viewers experience.

These days all it requires is basically a point and click and you have access to effects and features the pro’s from years ago could only dream of!

Unfortunately this has led to the concept of adding effects for no other reason than because the editor can.

What has been lost for many amateur editors is the understanding of why you would add a particular effect and how it can (or can not) further the viewing experience.

One of the simplest of these effects would have to be the split screen.

From almost day one of digital video editing software even at the consumer level this has been a feature on offer yet the average person using this effect almost invariably has no real understanding of what it is supposed to achieve.

Every effect has a purpose and if you are not trying to achieve that specific purpose then using whatever effect it is only achieves the opposite of your intention.

Check out the video below for an excellent essay on the use of split screen and bear in mind every effect in your library has its own set of rules and creates its own responses in an audience.

So for the past month or so there have been some pretty dramatic changes going on over on YouTube with regards to policing inappropriate content as well as the the YouTube Partner Program.

Whilst I think YouTube’s handling of the inappropriate content issues was way too heavy handed, the reality is that they needed to do something about it because it was an elephant in the room they had ignored for too long.

The other issue of the YouTube Partner Program has been evolving for a few weeks now and again YouTube on the surface of things seems to have again acted in a heavy handed way.

However the reality of that one is probably not quite what it seems and there is a reason for that.

Most of the honest YouTube content creators have been very vocal in their commentary on those changes and have colored the picture to some degree with there own takes on things.

However if you take a step around to the other side of the argument (YouTube’s) you can gain a better understanding if why YouTube have had to take such drastic steps.

For what I think is a balanced view on all of this from someone closely affected by it, check out the video below.

Yikes! Well you learn something everyday!

Yesterday I was aimlessly scrolling through the User to User Forum for CyberLink PowerDirector and came across this little gem.

Apparently for some time now a few of the guys on the Forum have been putting together a newsletter offering all sorts of video editing industry news as well as tips and tutorials on using PowerDirector.

So if you are a PowerDirector user I would highly recommend going over to the forum (link below) and taking a look at this month’s edition.

You will notice that on the page you can access all past editions of the newsletter.

If you like what you see and want to receive notifications when new editions are posted then just subscribe to the forum page itself and you should get an email sent automatically.

Some Out of Sync Problems Solved

An excellent article this week over on Premiumbeat regarding out of sync issues when it comes to capturing game play and subsequently editing that footage.

Now before you dismiss this as perhaps being irrelevant to you because you are not avidly gaming and posting your game play online, bear with me cos’ I am going somewhere with this!

Out of sync audio issues in general video editing can come from a number of sources.

Usually it is either errors at the point of capture (in camera) or errors on the timeline that will translate into those errors existing in the final file.

The “in camera” errors are not always considered to be errors in that under normal playback conditions those errors do NOT result in the audio going out of sync.

These errors only appear when it comes time to manipulating the files as would occur under normal editing conditions.

Remember, most of the file types you and I are going to be dealing with were designed specifically for distribution (playback) purposes and at no time was editing considered as part of the process.

That leads us to the second common source of out of sync audio and that comes down to computer resources.

Editing modern video file types that were not designed for editing throws and enormous amount of stress on your average home computer and when it comes to 4K, that stress goes through the roof!

So apart from referring to the article below on understanding and correcting out of sync issues there are two steps you can take from the outset to see if you can solve the problem yourself.

The first is to use proxy or shadow files for editing high definition footage.

This takes all the pressure of your system during the editing process and can solve a lot of problems right off the bat.

The second is that if you suspect your original files may have small an mounts of error simply load them one by one on to your timeline.

Then directly export those files at exactly the same parameters that they were captured at.

Very often this “processing” will automatically correct any tiny errors and you should be fine to edit with the new copies.

How To Use A Gimbal Properly

With the introduction of high definition shooting at all levels of the video market a few things very quickly came into focus… or out of focus depending on how you look at it!

The first one of course was in fact focus!

As a result, auto-focus on consumer cams became a big thing!

Similarly high definition is very unforgiving of camera shake and although editing software makers have been making advances in digitally removing or reducing camera shake in post production, in many cases it can still be a hit or miss affair.

So here we are now and it is not unusual for use to be in possession of a gimbal or similar device on top of our camera to try to make sure we are getting steady footage.

Now all gimbals were not created equal but there are some things you can definitely do to get the most out of yours.

How a TV Works in Slow Motion

One of the most persistent problems that many home movie makers face is working out how and why various frame rates and resolutions come into play when outputting a video project.

These days things are getting simpler with most cameras and TV screens running on what is called a progressive frame rate.

However not too long ago and still relevant in the world of DVD it didn’t (and still doesn’t) work that way.

If you are still working in the world of DVD and are perplexed by such things as interlacing then it might be a good idea to go back to basics and check out exactly how it is that your TV screens are displaying those pictures that we all see as moving.

Well it seems to be about color correction and shot matching this week!

For me one of the last frontiers of video editing in the post production area that I am still a complete loser is when it comes to color correction.

I am truly hopeless at it and honestly week after week I see tutorials on it that I can happily follow along with.

The problem is that it seems to take me about a nano-second after I begin color correcting to lose all perspective on where I started and where I am now.

So if you ever see me offering advice on the subject, please write in and tell me to shut up!

In the meantime watch one of Maliek’s videos because he seems to understand what he is doing!