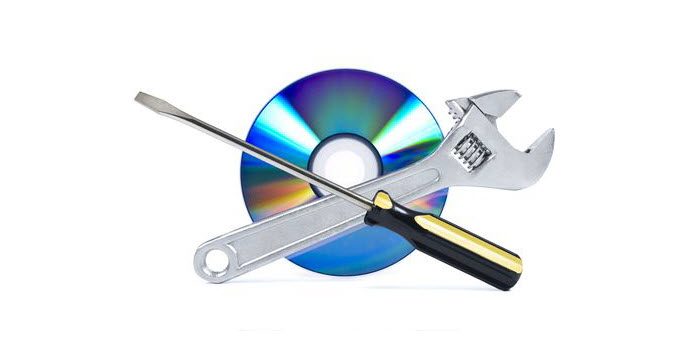 On this page I am going to layout what is (hopefully!) a logical set of steps to follow so that you can firstly identify a problem you may be having with a CD, Blu-ray or DVD disc followed by some steps you can take to correct that problem.

The sequence here should apply to just about any situation you have with a DVD, CD, Blu-ray or game disc regardless of whether the disc contains just data or if it has been created to play back video.

As a word of warning, some of the steps may involve treatment to the surface of the disc to correct reading errors and it is important to note that they may NOT be applicable to Blu-ray discs.

Blu-ray discs are manufactured differently and only light polishing is suitable for them.

Doing otherwise may result in permanent damage to the disc surface that may render the disc completely useless.

The main difficulty in starting out is that you are most likely getting some kind of error message from the disc reader and you think that the problem is from some particular source because of that message.

Common error messages such as Disc Error, No Disc, Invalid DVD Navigation or even Invalid File Structure tend to make you think you have a problem disc… not a problem reader.

The reality is that these and just about all other error messages you may get are essentially meaningless and are telling you nothing.

They are simply pre-written error messages that may randomly appear from within the software when ANY kind of problem occurs.

They are not the result of some hidden and highly technical diagnostic process having been carried out by the software! It’s just smoke and mirrors!

For example you can place a faulty disc into a reader and have it report that there is No Disc… which is just silly because obviously there is a disc in there!

So let’s get started.

Is It A Disc Error or a Player Error?

If you have a disc that won’t play in a particular device the first thing to do is to take the disc out and inspect the surface of that disc in good light.

Angle the disc so that you can see the surface clearly and not just reflections.

Look for any obvious scratches or marks or even heavy fingerprints or dirty areas. The key area of the disc to check is right at the center where the data begins.

Regardless of what is on the disc and what type it is, the data is written from the inner area first moving from there towards the outer edge.

This inner area is the most important as it contains all the information the reading device needs to identify what type of disc it is and the exact physical location of the beginning data.

Scratches, marks or soiling here can make it appear to the reader that the entire disc is inaccessible or that there is nothing on the disc at all.

If there is light marking or dirt then use a very soft cloth to wipe the disc clean using straight strokes beginning at the center and going out to the edge.

Do this all the way around the disc until it is clean and shiny.

Try it again and if it is still not playing properly take the disc out and try it in another player or reader.

You may have to engage in a disc surface repair at some point which can be done manually or by using a disc repair machine.

If it won’t play in any other reader or device then you can be pretty certain you have a genuine disc problem.

If it plays in other readers then your problem is most likely the reader, not the disc.

In this case purchase a DVD or CD player lens cleaner (they are very cheap) and try that.

If cleaning the lens still results in failures then it is most likely that the disc does have problems and that some readers may handle it OK whilst others can not.

Given That Now We Know it is the Disc

There are basically two types of error when it comes to optical discs.

1. Physical damage to the surface of the disc such as scratches and marks or the presence of foreign substances.

On video discs this will cause skipping, jumping or macro blocking (big squares on the screen) as a result of the software trying for too long to re-read the difficult section.

You may also get a total failure of the reader to detect the disc or begin playback.

On data discs you will get failures to read the data or even detect the presence of the disc itself.

Data errors often originate from when the information was originally put on to the disc.

Burning errors create the same effect with the data not recorded correctly on the burning surface of the disc and throwing confusion into the situation.

The software spits a silly error message at you in the hopes that you will go away!

Note: All discs, whether created commercially using state of the art pressing techniques or simply burned on a home computer have at least some degree of error. This is normal.

Playback devices and software are designed to handle and compensate for these inevitable errors but when the level of error reaches a certain point they will ultimately fall over in trying to deal with the situation.

In addition to the burning errors mentioned another problem that may occur can be the result of the burning surface of the disc degrading in some way so that the data can no longer be read.

This is most often attributable to disc being left in strong light for extended periods of time or by using RW discs that have begun to fail.

If you inspect a disc and can see discoloration of the burning surface, not the disc surface, the actual foil-like burning surface below then you have a data problem however it is often the case that you cannot actually see any damage.

So Where to From Here?

If the surface of the disc looks fine then Click here for instructions on Error Repairs and Data Recovery.

Previous Post: « Data Recovery for all Optical Discs Such as DVDs CDs and Game Discs
Next Post: How to Merge or Combine Two Three or More DVDs into One »