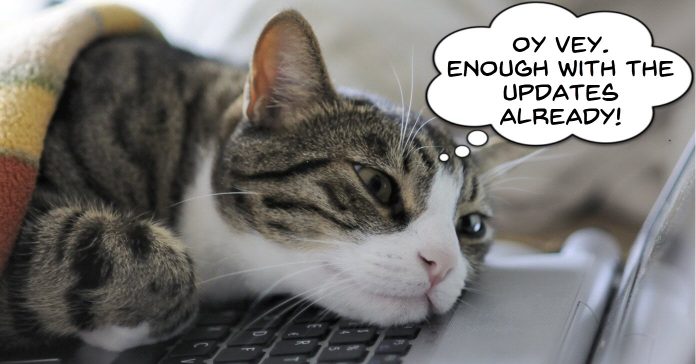 OK, so it seems we are back to normal this week after what seemed like an endless procession of updates.

Running a site like this is generally not too much of a problem but maintaining the weekly roundups during update season does get a little overwhelming at times!

Thankfully I think most of the annual updates are finished now so I can relax back into my usual slacker mode.

Mercifully the Filmora one was a basic maintenance release and didn’t require a full re-write of my review like the others.

So to put all of this to bed and get on with normal life here are all the links to the latest reviews of the programs in question:

One aspect of Corel’s development of Pinnacle Studio over the years has been their effort to include some of the more modern features found in many of the current video editors on the market.

It could never be said that Pinnacle Studio was lacking in any of the more advanced features in video editing and in fact was always a bit of a front-runner when it came to power and control.

However over time users have come to expect their editors to also have some reasonably efficient modules for the creation of what we could probably term as “quick” projects.

The kind of project you want to pull together fast without spending hours in front of the computer fine tuning every little detail and adding every effect and filter known to mankind!

To that end Corel have incorporated some of the concepts behind their other video editor VideoStudio, to add some of these more convenient solutions to creating quick projects.

The Smart Movie feature deals with that problem and allows you to open a more simplified editing module which allows you to just add your assets and create a movie almost immediately.

Of course you can always take the project from “easy mode” back into the main editing interface for those final tweaks.

In the video below you can see just how easy it is to create a slideshow with just a few click and drags.

So it used to be that in order to get hold of free sound effects you had to do endless Google searches and even sometimes navigate your way through some rather dodgy areas of the internet to find anything of use.

These days the guys at Premium Beat seem to be doing all the heavy lifting for us!

The link below goes to yet anther page on their site with links to a bunch of sound effects for all sorts of things which you can use in your video projects.

Impressive video from Basic Filmmaker this week which runs just over an hour in length from start to finish.

In it he covers his entire process start to finish for creating a video and getting it online to his YouTube Channel.

I can’t say too much about this one because it really does cover everything.

The sheer volume of information and its value is incredible so if you are uploading to YouTube already or are thinking about getting into it then this is the one for you.

On the other hand if you are just into shooting and editing your own videos there are some great tips in there for you as well.

As I said previously, it is around an hour long so grab a beverage of choice, sit down and check it out.

Perfect your Film with Cinematic Motion

I found this lecture on the Film Riot YouTube Channel this week and it really is a fascinating watch.

The first part of the video is an intro to some courses but then it goes into a lecture presented by a professional director covering how to actually shoot video the right way.

By that I mean what shots you need to get and how to arrange those shots to have them make sense to an audience.

Most importantly he covers a concept that so many people miss when putting together even the most basic video a home movie maker would be likely to make.

Remember, even if you are not shooting a multi-million dollar Hollywood blockbuster there are certain rules which if followed, will give you great results.

Conversely, if broken the result will be disjointed and confusing to the audience.

The most important of these is the wide, medium close up rule.

Simply put it means you have to have a wide shot to establish where we are, a medium to bring us into the action and a close up to focus us on what is happening.

You can then reverse that out to a medium and then go wide again or close again but this pattern has to happen or else the viewer will drift.

Now you may be thinking that you only video family gatherings or kids parties but the rule remains constant no matter what the subject of the video is or the level of expertise you may have.

This video is a run through of the basic editing functions of Pinnacle Studio.

If you have just upgraded to Pinnacle Studio 21 it is a great refresher on those basic actions and if you are looking for some video editing software the video gives a pretty good overview of what the software is like to work with.

This is another in the series of shorter videos showing how to access and customize features and effects in pinnacle Studio.

This one covers the Paint Effect which can change the look of a video into various types of “painted” or “hand drawn” looks.

Many people kind of shy away from these effects because as just a static effect they are not all that interesting or look a bit cheesy.

However if you check the video below you will see that Maliek uses Pinnacle’s ability to incorporate key-frames into the process so that the effect is not just applied or not applied.

He also covers using the controls that come with the effect so that you can adjust how it works and exactly how the final result will appear.

How To Make Glitch Distortion Effects

One of the subjects that generally gets a run in the Friday Roundup on a regular basis is the subject of transitions.

I make no secret of the fact that I particularly dislike the prepackaged transitions that come with most video editing packages.

There is nothing that will make your projects scream “amateur” more loudly than by using those preset transitions in most projects.

The reality is that the transition that has the title of “the professional’s transition” is actually no transition at all, it is just a straight cut.

Anyway, before I get too far along into a rant on this I wanted to present the video below on adding a glitch effect very simply to a clip.

The reason is that in the video showing how to do it the editor actually uses the glitch effect as a transition.

In itself the video is fine and shows the steps but more importantly it highlights the fact that a transition can be just about anything and can be made to order by you using the tools you already have.

Bear in mind the demo is being done in Filmora which has to be one of the simplest editors around yet even it can do it just fine.

The second part of the video goes into a similar process using Premiere Pro which obviously results in a far more polished look.

Just about every video editing software above Filmora has the capability of using key-frames and just by adding an effect to the end of a first clip and the beginning of a second using key-frames you can create a whole world of your own transitions.

With the release of the recent update of CyberLink PowerDirector it is pretty safe to say that if you knew you way around the earlier version you are already good to go.

This latest update wasn’t so much about the overall look of the program or any drastic changes to the interface.

If you are considering it as a choice for your first or next video editing software the video below will give a good overview of what you can expect to find.

For a more detailed overview of the program you can read the PowerDirector Review here.