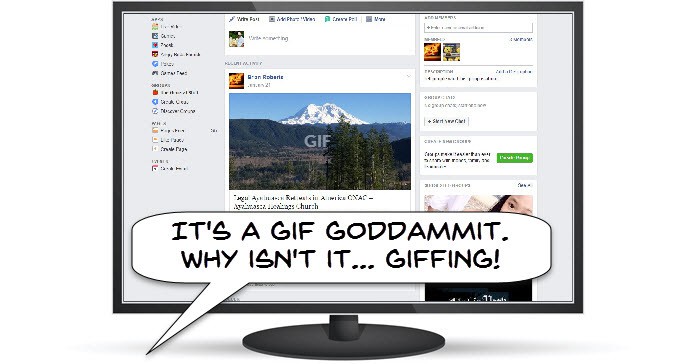 One of the most interesting ways to attract attention on social media sites is with images and videos.

Statistically speaking posts that use either images or video win hands down when it comes to getting attention.

Probably the king of them all are GIFs because they contain the best of both worlds.

It’s an image and a video with the added bonus that the user can see it is a GIF so will not be reluctant to click on it for fear of going into a “wait” while the video loads up to stream.

Each of the major social networks have their own particular rules or methods for uploading or posting GIFs and if you get it wrong they can sometimes just display as a single image.

Check out the guide below for all the ins and outs of GIFs on social media sites.

How To DIY A White Background For $0

OK, so one of the most common shooting arrangements for video these days is to use a simple white background so what could be easier?

You just get a white background from somewhere and hey presto, you are done!

Well perhaps you may have to settle down a little there tiger because using a white background although simple, has a few things you may need to get right.

First of all most people shoot their videos using the automatic settings of the camera because it is easier and to be fair, these days auto features give pretty good results.

However in the case of a white background this all goes to hell in a basket pretty quickly!

The reason for this is that when your camera is adjusting how much light can enter the lens to be recorded it can’t actually “see” the way we do with our eyes.

All it can do is identify the amount of light (too much or too little) in total and adjust accordingly.

So when a cam in auto sees your head and body in front of a white background all it sees is a whole bunch of way too bright light so it shuts down to compensate for that.

The problem is that in doing so it will then make you so dark you will be just a black blob against a white background.

The upside is that the white background will look awesome!

You may have experienced this effect yourself when shooting on auto indoors.

You follow the action and everything looks fine until the subject moves in front of a window.

Suddenly the auto kicks in and adjusts to suit the extra light coming in from the window while your subject suddenly disappears into darkness.

There are a few other things you need to get organize but truthfully shooting against a white background is a simple technique as long as you know about just a few settings you have to adjust.

A Global Shutter for CMOS

There was an announcement this week by Canon that marked quite a significant point in the development of digital video cameras and I was a little surprised at the lack of coverage it received.

Canon announced that they had developed a Global Shutter for their CMOS sensors…. OK, I can hear you yawning already so let me explain why this is a big deal.

There are two types of sensors used in any video device.

The oldest is the CCD and the new kid on the block is the CMOS sensor.

I won’t go into all the technicalities here but there has always been one major difference between the two.

A CCD in a camera captures the image at the time in one go.

In other words all the data on the CCD at the time when the shutter fires is grabbed and then converted into digital information.

When it comes to the CMOS system the data is captured when the shutter fires from the top of the sensor, line by line, down to the bottom in a scanning type motion.

The result of this “scanning” capture is a problem called Rolling Shutter which appears when either the device is panning or moving quickly or even the subject is moving quickly.

The scanning from top to bottom system for CMOS means that sometimes if the camera or subject is moving rapidly its position has changed microscopically WITHIN that one frame.

When this repeats (as it does in video) over and over it results in distortion of some shapes or objects in the final video.

The degree to which this is a problem depends on the hardware and software of each camera so in some cases it is quite marked and in others barely noticeable.

However it is a problem and one which requires camera makers to find solutions to.

Previously, due to engineering restraints in the way CMOS sensors work a shutter system that can capture the image in the same way as for CCDs has proven elusive… up until now.

So why is this important?

Well CCD sensors are pretty much at the end of their development cycle.

They are bulky, use a lot of power and have not really been able to progress in any significant way for a while now.

On the other hand the CMOS is just a kid with its whole life ahead of it and now that Canon have developed a global shutter system for them, things are about to change bigtime.

Stumbled across this awesome mashup video this week and just had to include it in the Friday Roundup.

It’s just an assault of famously weird supporting characters from some great movies and is four minutes of pure indulgent fun.

This is good basics type tutorial video on syncing externally recorded audio to a video track.

Although it is shown using PowerDirector 14 the same principles apply to any video editing software.

The other scenario under which you may need this is that you have separated the audio track from a video track and have edited it so heavily that the start and finish point have now changed.

Simply adding it back to the timeline won’t do the trick now because the sync will have gone out.

Now obviously this is a situation you would try to avoid however there are times when you just have to do it so this video will give a good idea of how to get everything back in sync.

How to Blur Faces and Objects Right Within YouTube

Most video editing software these days comes with at least rudimentary object overlay features which allow you to place an object over a position on the underlying video.

Higher up in the food chain you can use this to add speech bubbles that track with the video or use a blur to hide things.

The very top editors even have modules which almost completely automatically track along with whatever you want.

What I didn’t know was that the YouTube editor also offers a slightly cut down version of this kind of feature.

Now the reason you may find yourself using it would be if your own video editing software can’t do it or if you have already uploaded a video then realize you need to.

It is a little limited and a tad fiddly but in a pinch it gets the job done.

Filmmaking with your Digital Camera

With the prices of cameras dropping into the realm of the amatuer video maker these days it is not unusual for the average person to have at their finger tips some pretty powerful equipment.

In other words you are getting much more bang for your buck these days.

The addition of that extra “bang” is very often lost on many people because although those features are used as selling points most people forget them once they own the camera and it’s a real shame.

If you are sitting at home in possession of a decent DSLR or even a good MILC chances are that you have the ability to shoot at a pro level but may not realize it.

Check out the video below from a professional videographer on using these cams for shooting video.

Now don’t let the “pro” designation put you off!

The video goes a long way to explaining just what you have and how you can use it and thankfully, defines its terms as it is going along.

For any of you that are using GoPros these days for your videos and want to add a little flexibility to the time lapse function then the link below is just what you need!

Although the GoPro is set up with the ability to record time lapse images to stitch together in a video unfortunately the fixed setting is for five second intervals.

That means it takes an image every five seconds.

Five seconds between shots is not necessarily an ideal setting, it’s just the most generally used or generic setting that will apply in many cases.

However there may be times you need to shoot at smaller or (most likely) greater intervals and that’s where this handy dandy hack comes into play.