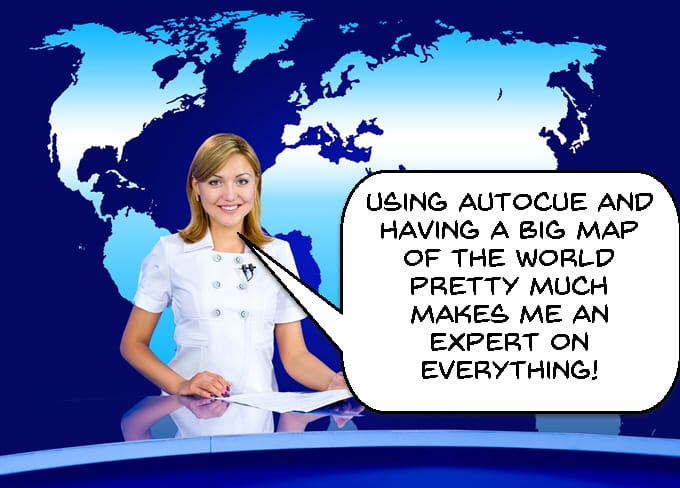 One of the most difficult parts of creating a video project that involves some kind of on-camera presentation is that of trying to appear natural.

For a very few people appearing on camera, remembering what to say, keeping track of where you are and all the while looking natural and relaxed is something they can just do with ease.

For the rest of us it can be a nightmare.

The beauty of this modern world of user created content is that people are no longer bothered to any great degree by a video that is obviously an amateur creation.

In fact in many cases a slick and flawless presentation can work against the project and not for it.

However there is a minimum cut off point and if your presentation is not just a little amateurish but downright uncomfortable to look at (because you are uncomfortable) then nothing will work.

One answer to this problem of appearing on camera is of course the teleprompter.

No, it’s not some magic pill that is going to turn you into a smooth talking news anchor overnight, but it will take a lot of stress out of the ordeal.

Used properly and in combination with enough practice you can learn how to appear natural and still manage to get all the words out in the right order.

I came across this video from Tim Schmoyer on the Video Creators Channel at YouTube and it really struck a nerve with me.

As a website owner or blogger or whatever you want to call me there are often times when I think of maybe just stopping.

I am sure for many people all full of hopes and dreams for their YouTube Channel it is exactly the same.

The media and even YouTube themselves tend to paint a rather rosy portrait of how totally simple it is to start a YouTube channel and become and overnight sensation.

Now most people are not stupid and I am sure they look at that kind of presentation of the subject and adjust it a little more towards the reality of the situation.

Unfortunately even that “adjusted” reality still has a ways to go before it gets anywhere close to the true reality of things!

Yes there are always going to be those that slap something up on YouTube and it goes nuts!

The problem is that when we see that we are not looking at the normal situation.

Building an audience on YouTube is just that, “building!”

It takes time and discipline and there will always be those days when you want to give up.

Tim gives a good rundown on this in the video below.

I’m not particularly fond of the concept of slavishly keeping up with the current trends in technology with the view that the latest and greatest is going to get me results I couldn’t get before.

Technology is developing and being released at such a rate these days it is hard to keep up and in order for the manufacturers to keep feeding that beast they have to get you to buy stuff.

How do they do that?

By convincing you that whatever it is they are selling is stronger, faster or even cooler!

So having laid out that little rant about all the latest wizzbang gadgets and thingies and how you should not be tempted by the marketing department but by your own common sense I also have to admit this.

I love checking out that new stuff and making excited sounds as the new “whatever” get released!

I just loves me some new gadgets! So in honor of all that’s new… check the link below!

One of the limitations of most consumer level video editing suites is that the graphics available are somewhat restricted in what they can do.

For the purposes of most projects even through to perhaps the semi-pro level there is nothing wrong with what most of them have it’s just that at some point there has to be a cut off as to just how far the average user is really going to take the graphics aspect of any project.

One thing I always really watch out for is when someone takes the existing functionality of a program and stretches it right to the edge of what it can do.

Too often I get people complaining that they can’t do something and therefore need some new software or tool to do it when I know for a fact that the problem is not a lack of functionality.

The video below from Gripps is an awesome example of someone stretching the limits of what can be achieved by the existing functionality of a program.

The program in question is Corel VideoStudio and the task he is undertaking is to create a 3D object.

It is important to understand that creating 3D objects is way outside the realm of what would normally be considered to be a feature in a consumer level video editor.

Yet here we are with a tutorial of Gripps doing just that!

He is quick to acknowledge the limitations of what is possible but honestly, he achieves a great result.

When you think about it, 3D modelling is a totally separate software world usually requiring a dedicated program so hats off the Gripps on this one!

10 Things To Learn From Pro Photographers

Although the title would tend to suggest this is a photography tips kind of video it actually crosses easily into the video arena.

It has a bunch of little “bits” that are easy to use and easy remember because they make sense.

OK I will be the first to admit that given my life and the type of videos that I will invariably end up shooting the technical side of things is something I remain a stranger to.

ISO’s, aperture and all the rest are meaningless to me most of the time.

I am an auto-shooter and I am not afraid to admit it!

On the other hand just because I choose to remain ignorant doesn’t mean you have to as well. (Although you can if you want!)

The video below is relatively safe and most likely will not overburden you with too much knowledge too fast!

Let’s get real here, when most of us think of low light we think of a darkened room or the deserted city at night right? Wrong!

In every review of a camera whether it be for stills but especially for video you will see at least some mention of low light capabilities.

The elephant in the room here is that most consumer do not really know what low light means and really do think of some kind of dark space.

The fact is that within the video or photography world the best example of low light would probably be your living room and the usual lights you have on while watching T.V.

Yup, that’s what they consider to be low light.

With the almost complete dominance of YouTube in the current video hosting space I guess some people may wonder as to the benefit of choosing another service such a FaceBook video or Vimeo for example.

When it comes to sheer coverage and exposure to an audience there is not much to be said beyond the fact that you need to be on YouTube!

However for some people YouTube may not actually be the best choice or the most suitable choice.

Next in line is usually Vimeo with a slightly different audience, a different way of doing things and a little more flexibility.

If you were wondering about this or had never realized that there was an alternative to YouTube then check the article below for a good side-by-side rundown on the strengths and weaknesses of both.